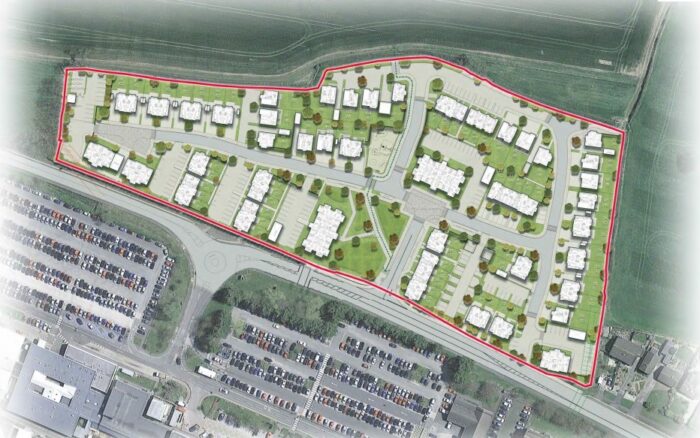 PLANS  have been submitted for 106 homes directly opposite Ysbyty Glan Clwyd general hospital – and potentially a “state of the art” mental health facility.

The application is being made on behalf of St Asaph-based Pure Homes and is planned for land directly across the road from the main entrance to the Bodelwyddan site.

There will be a mix of housing and apartment types according to planning documents and promises “ample public open space and tree-lined roads” and a children’s play area.

The proposal is offering 17 detached four and five-bed homes, 26 three-bed semi-detached properties, 25 two and three-bed mews dwellings and 38 two-bed apartments – with 227 parking spaces across the site.

It emerged within the documents agents the Planning Consultancy had only received two responses to a pre-application consultation.

It had only approached one householder directly, whose property adjoins the agricultural land being proposed for development.

In addition one owner of adjoining farmland, Bodelwyddan town council and the local county councillor were among others approached for comment.

Welsh Water drew attention to one water main running through part of the site and Natural Resources Wales said it didn’t need to be consulted at the pre-application stage.

In a transport assessment submitted as part of the application it said: “The proposed site access will take the form of a priority controlled junction with ghost island right turn facility off Rhuddlan Road.

“The right turn facility will ensure vehicles associated with the development can access and egress the site in a manner which does not cause harm to the operational performance of Rhuddlan Road or the hospital roundabout junction.”

It also said it would “positively promote” walking, cycling and public transport use at the site.

However the new development would be almost adjacent to an area earmarked by Betsi Cadwaladr University Health Board for a “state of the art” mental health facility.

The board is currently looking at the finer detail of putting the unit on the north-western corner of the Ysbyty Glan Clwyd site, which is currently a car park.

Jill Timmins, programme director for the Ablett Unit Redevelopment, said the health board had taken on board residents’ concerns and remained committed to working closely with the local community, after original plans were rejected in January because they were too close to exiting residential housing.

She added: “The new location is away from local residents’ boundaries and may afford patients therapeutic views over green spaces to the rear of the hospital.”

However the new housing development could possibly impinge on some of those “therapeutic views”.

The developer of the proposed new housing estate said it wants to “create an aspirational place to live and a sense of place” with its new scheme.

It added: “The proposed development is located to the west of the Bodelwyddan town, directly adjacent to Glan Clwyd Hospital.”

Residents and interested parties are able to comment on the full application by visiting the Denbighshire county planning portal until September 15 and looking for planning reference number 40/2021/0825.