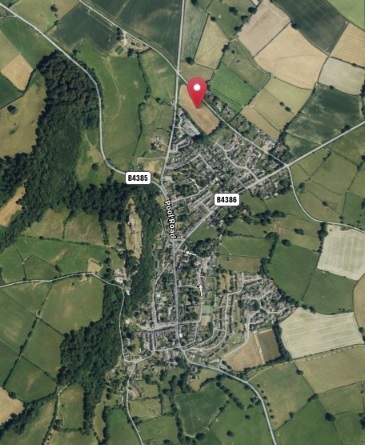 A planning application to build 33 affordable homes in Montgomery has been called in for a decision by Powys County Council’s (PCC) planning committee.

The application has been made by Mid Wales Housing Association to build the homes on a 1.6 hectare field off Forden Road.

Montgomery County Councillor, Stephen Hayes (Independent) has pointed out that the land is an “exception site” which means that it is outside the town’s development boundary, and only affordable homes would be allowed on the site.

“I note that this proposal relates to an exception site, and that land with a housing allocation in the current LDP (Local Development Plan) is situated nearby, and lies undeveloped.

“I also note that this site was previously designated as an employment site.

“For both these reasons, I would prefer to see this proposal brought forward on to the allocated housing site.”

Cllr Hayes also pointed out that the  junction of New Road and Forden Road next to the site is dangerous with poor visibility.

Cllr Hayes, said: “Remodelling of this junction has been held to be contingent on development of the application site, and I am extremely disappointed that the application does not address this issue.”

He hope the applicant and the Highways department could work together to find a solution for the junction.

Cllr Hayes added: “This proposal represents a significant increase in the residential accommodation of the town and is on an exception
site.

“As submitted, it raises the highways issues.

“For these reasons I should like to call in this application for planning committee determination.”

Agents Pickstock Homes, explained their proposal in a Design and Access Statement

Pickstock Homes, said: “This area of Montgomery has seen generally housing development expanding from the town centre towards the site with some commercial development adjoining the site to the south west.

“A residential development is being completed to the south east of the site.

“A single band of dwellings have been built over a number of years along New Road to the north west of the site.

“The scale of the development will be limited to one and two storey houses.”

They hope to build;

The application will be decided at a future date.