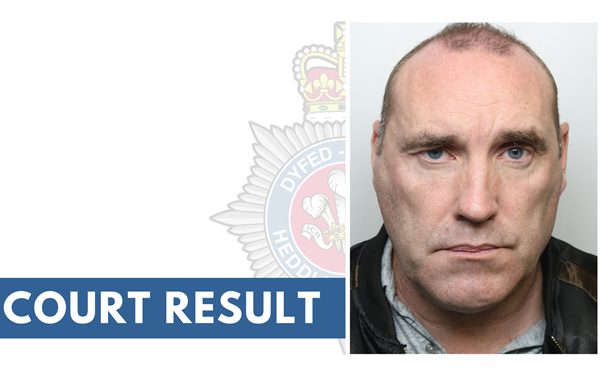 A man has been sentenced to 30 years – 22 years in prison with an eight-year extended period on licence – for the sexual abuse and rape of children following an intensive investigation by Dyfed-Powys Police.

The charges involved four children, who were supported through the investigation by specialist officers from Dyfed-Powys Police.

Investigating officer DC Kieran Griffiths said: “James was initially arrested for breach of his Sexual Offences Prevention Order (SOPO) in May 2019, this had come about following a report of him having unsupervised access with children.

“We would like to thank those individuals and their families that came forward at that time.”
As the investigation into these matters progressed, the level of depravity James had forced on innocent children in horrific attacks was uncovered.

James admitted four counts of breaching his SOPO ahead of the trial but denied all other charges.
A further two counts of breaching his SOPO, which was imposed on him more than a decade ago, were added before he was sentenced today. They dated to 2019 and involved a further two children.
DC Griffiths said he was pleased James had been given a lengthy sentence, which he hoped would bring some closure to the victims.

“It is good to get this result for the victims and their families, who have shown a great deal of courage and dignity throughout the investigation and court process,” he said.

“James is a manipulative man. He tried to avoid going to court but was deemed fit to stand trial on two occasions.

“He then refused to attend court when his trial came around, showing complete disregard for his victims and the ordeals he had put them through.

“This investigation has been a huge undertaking for officers and staff in various departments at Dyfed-Powys Police, so I’m pleased their hard work has paid off.

“Hopefully the sentence handed down to James today will help all the victims and families to move on with their lives.

“As this case shows, we will always take reports of this kind seriously and treat victims sensitively, providing specialist support throughout the investigation and court proceedings.”

DI Phil Kite added: “James is a dangerous sexual predator and the sentencing reflects the gravity of his offending and the impact it has had on the victims.”

He will remain on the Sexual Offender’s Register indefinitely.