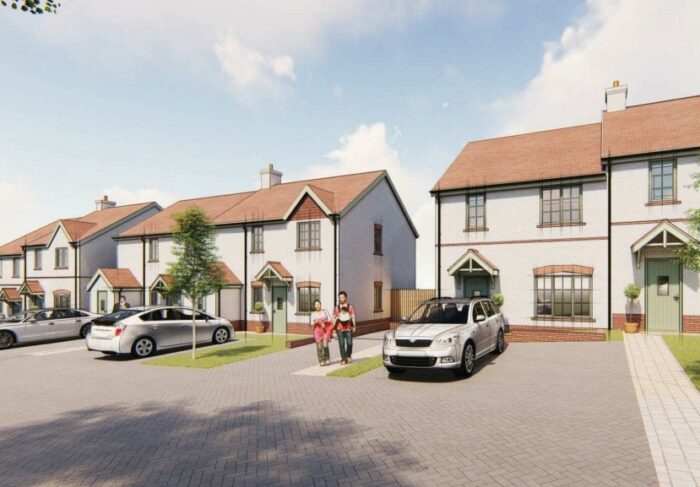 A DECISION on whether to approve building houses on a village green in the Vale of Glamorgan has been delayed.

Vale of Glamorgan council is applying for planning permission to build four houses and six flats on a village green in Bonvilston.

The plans have caused local opposition from residents who say they use the green regularly and there is little alternative open space in the village.

Councillors on the planning committee voted to defer the application at a meeting on Wednesday, September 1, as they couldn’t come up with a reason to refuse permission.

The ten homes would be built on the village green north of Maes-Y-Ffynon, and would be classed as for social rent. Villagers had applied to legally protect the land by registering it as a village green, but this was rejected.

The local community council also asked to buy the land from the Vale council, but this too was turned down. Local residents and the chair of the community council told the planning committee why they opposed the plans to build the homes.

Ceri Hunt, who has lived in Bonvilston since 2015, said: “Bonvilston is a very close community, however it has very little recognised and usable green space. Many residents of Maes-Y-Ffynon moved to the street when the houses were first built and created a community around what we still consider to be our village green.

“This is a valuable space for the community’s health and wellbeing. My children play regularly on the green which I consider as a safe space for them to go alone and gain some freedom and independence. It has been more and more important the last 18 months while we’ve been confined to our homes due to the pandemic.

“Without this space during lockdown the village would have been a very different place. Once it’s gone, it’s gone forever. The loss of the only safe and usable green space is in your hands and it would be a very sad state of affairs to see it go.”

Ian Perry, chair of St Nicholas and Bonvilston community council, said: “The community council is unanimously objecting to this proposal with a huge list of reasons. Welsh Government policy is firmly behind trying to protect these parcels of land.

“The community council asked for a community asset transfer, but we were refused. The community council has the money to purchase the land and enhance it. There’s a new development in Bonvilston of 120 new homes, only 12 of those have been sold since they started building in 2018, and only five are occupied.”

Council officers said about two thirds of the land would be kept as open space, and added the “blasé term ‘climate emergency’” shouldn’t prevent new development being built.

Council planner Stephen Butler said: “Even though we’re not disputing the site is open space, it doesn’t have that village green status.

“Clearly there’s frustration at the loss of what is being described as a village green. In our opinion there’s still a very usable area of informal open space. Roughly two thirds of the site will be built up, but a third will be retained.

“This is us getting ahead of the game and delivering what really is needed in Bonvilston and the wider Wenvoe ward.”

Marcus Goldsworthy, the council’s head of planning, said: “The declaration of a climate emergency doesn’t prevent future development. If it did, then we would all not have a job and might as well go home.

“What it does do is mean we must take account of the climate and future developments that happen. There’s a desperate need for housing for this community. It’s really important we don’t use that blasé term ‘climate emergency’ to dismiss all development.”

Councillors on the planning committee were split on whether to approve permission. Six voted in favour of approval while seven voted against.

Cllr Christina Cave said: “It’s a beautiful area. It’s a sad reflection on where we are as a society that previously social housing was deemed to have open spaces such as these, and today we’re being told we shouldn’t have those areas or that one need takes priority over another.

“It isn’t very neighbourly to prioritise somebody else’s need over the people who already live there.”

But instead of voting to refuse permission, the committee decided to defer the application, as nobody could think of a legitimate reason for refusal. Under planning law only a strict set of reasons can be used to refuse plans, and “being unneighbourly” is not one of them.

It’s unclear when the planning committee will next consider the application.