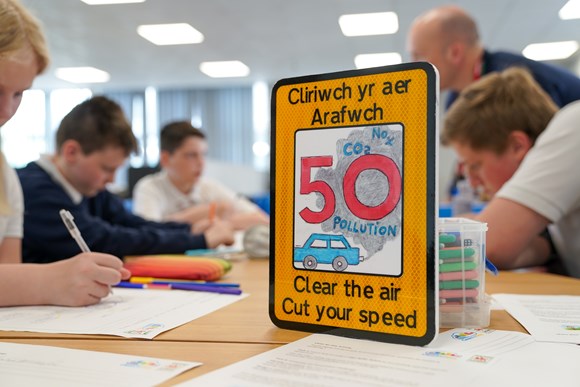 Pupils across Wales have been getting creative to spread colourful safety messages on Clean Air Day.

The learners were taking part in a series of workshops organised by the Welsh Government that focus on air pollution sources and the impact they have on health.

Bedwas High was one of 40 schools to take part in the initiative which was delivered by Engineering Education Scheme Wales/STEM Cyrmu on behalf of the Welsh Government.

As part of the workshop, pupils were challenged to design a road sign to encourage drivers to slow down in order to reduce nitrogen dioxide pollution and help make the air they breathe cleaner.

The winner of the competition was Year 7 Bedwas High pupil, Miley Fletcher with joint runners-up named as Thomas Lukins (Bedwas High) and Amelie Norbury (Christ the Word school in Abergele).

The winning sign will be produced and installed at locations across Wales where the environmental 50s speed limit is in place.

“I was over the moon and really excited and happy when I found out that I had won! I wanted to create a design that was short and snappy, and not too distracting for drivers, but also raise awareness of cleaner air at the same time. I feel my design does this and I am really proud of my achievement”

“We are thrilled to continue supporting Clean Air Day Wales in its sixth year and applaud schools like Bedwas High School for taking such creative action to inspire a cleaner air future.”