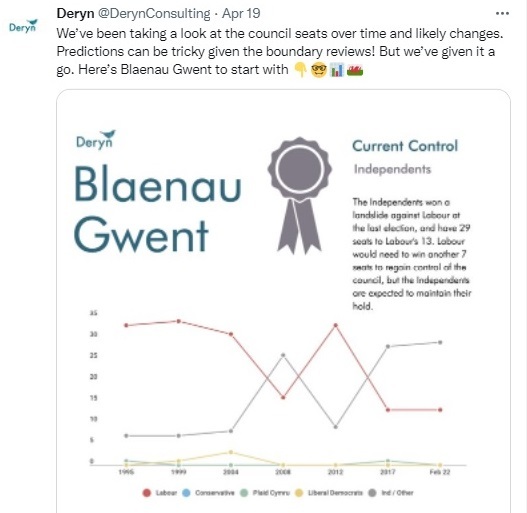 BLAENAU Gwent’s Independent councillors who were part of the group that ran the council from 2017 to 2022 will be hoping that they can keep control of the county borough at this May 5 local elections.

Political pundits, Deryn Consulting have predicted on social media that the Independents will emerge from this year’s election as the biggest group.

However, their prediction does not take into account the boundary changes which see the number of councillors drop, as well as bigger council wards.

Bigger wards usually give political parties a distinct advantage as they can call on volunteers to help their canvassing effort.

Independents don’t have a collective manifesto, they campaign on issues that affect their own wards and electorate, as the last council leader Nigel Daniels explained to the Local Democracy Reporting Service.

Out of the 69 candidates and wannabe Blaenau Gwent councillors, 28 are standing as independents.

A further four who left the description on the form blank can also be taken as independent candidates.

What can the independent councillors actually offer?

The Local Democracy Reporting Services has looked at what some of the candidates have said in their own personal manifestos.

In 2017, Wayne Hodgins was elected as one of three councillors in Brynmawr, he hopes to be re-elected this week.

In his election literature, Mr Hodgins points out that it was his group that were behind the proposal to freeze council tax this year, a proposal agreed by all councillors back  in February.

“As your councillor I will continue to support businesses on grants and residents on matter such as planning, housing applications, fly tipping and general advice which will help communities in their day to day lives and deal with the problems swiftly.

“As before I won’t make any false promise.

“My only promise is to work hard for the people of Brynmawr.”

Greg Paulsen is standing in the Beaufort ward, which now includes part of the Badminton ward, which he represented for the last five years.

While leaving the declaration form description of his political affiliation unfilled, he has been part of the ruling Independent group.

Mr Paulsen’s manifesto includes a pledge to continue to campaign for continued improvement and investment in roads as well as no cuts to front line services.

Mr Paulsen’s other pledges include:

“Retain my independence to ensure that I can stand up for your concerns outside a political party.

“Continue to support and campaign for investment in environmental issues and investment into a cleaner and greener environment for us and the next generation in Blaenau Gwent.

“Ensure that access to open spaces is protected for this and future generations.”

A new candidate in his first council election is Josh Rawcliffe, who is standing in the Abertillery and Six Bells ward.

He was inspired to stand for council due to what he saw as an injustice earlier this year when a motion to pay some Blaenau Gwent staff who missed out on a government payment of £735 was voted down.

It was thought that Welsh Government’s NHS and Social Care Financial Recognition Scheme did not encompass all those worthy of the payment.

Mr Rawcliffe said: “One of the things that’s vital is truth and transparency.”

He added that this was a historic problem with the council and that there needed to be a “moral compass” when decisions are taken.

“I’m a disabled, mixed race single Dad, and over the last couple of years with lockdown especially, I have needed that extra support.

“I suffer chronic pain and am very angry, but doing community work helps me channel the anger for good.”

He believed that voting against that motion was a slap in the face for staff as well as all the service users that they helped.

“I felt it was ethically and morally wrong, said Mr Rawcliffe.