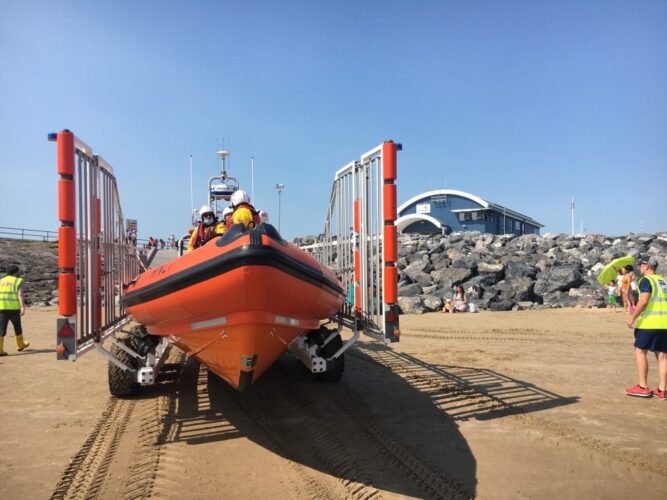 IT has been a busy 24 hours for RNLI stations across Wales.

On Tuesday, June 23 both of Tenby’s RNLI lifeboats were requested to launch at 1.50pm  after a request from Dyfed Powys Police for the third day in a row, to resume the search for a missing person.

The inshore lifeboat searched the inaccessible coves, beaches and caves from South Beach as far as Lydstep Beach and then the North side of Caldey Island, with the all-weather lifeboat searching up as far as Telpyn Point and back towards Tenby, while Police and Coastguard Teams searched ashore and the Police Helicopter searched from above.

With the search area exhausted once again and with nothing found, both lifeboats were stood down and returned to station, arriving at 3.10pm. Tragically, a body was found  on Pendine beach.

In Rhyl, despite Wales being in stricter lockdown than other regions, the crews of Rhyl’s lifeboats had a busy period during the afternoon of Wednesday 24 June.

The first call came as some off-duty lifeguards self-training on Prestatyn beach, saw a person appear to be struggling in the water, and called the UK coastguard via 999 to alert local coastguards and the lifeboat crew. As there were multiple reports of people in trouble, both the inshore and all-weather lifeboats were launched, together with the local Rhyl coastguard team. When all the rescue teams arrived on scene, they could not find anything untoward, and enquiries with some local youngsters found that all was well. The lifeboats returned to station by 4.35 pm.

At 5 pm, the UK coastguard at Holyhead received a 999 call reporting an adult who had fallen and sustained a possible broken leg on the rocks at Towyn. The local coastguard team went to the spot and decided the person could not be recovered safely to the road, so the lifeboats launched and successfully recovered the person on to the all-weather lifeboat. All units returned to station,and the casualty was transferred to an ambulance and taken to the local hospital.

The lifeboats were sanitized and cleaned down and were ready for service at 7.30 pm.

It should be stressed at this time, that Wales is under different COVID-19 regulations than other parts of the UK. The restrictions are a lot more rigid, and travel to Welsh beaches is still not recommended just yet.
However, RNLI lifeboats will continue to provide a lifesaving service on North Wales beaches.

Shortly after returning from the previous shout, the Haydn Miller was requested to launch for a second time in the day, this time after a report that someone was possibly in difficulty in the water off Pendine.

The volunteer crew made best speed to Pendine and started to search for the casualty.

As it is able to get much closer to shore, the Y-boat was launched with two crew members aboard. The casualty was quickly located and brought ashore to the awaiting Police, Ambulance and Coastguard Teams.

The lifeboat then returned to station, arriving at 5.15pm.

In Mumbles lifeboats responded to Multiple casualties caught in a rip tide.

Just after 11:35 this morning the Volunteer crew of the Mumbles Lifeboats were tasked by UK Coastguard at Milford Haven to assist with multiple casualties caught in a rip current at Three Cliffs bay.

Both boats were launched as well as Coastguard Helicopter and Horton Port Eynon Lifeboats.

Thankfully all casualties returned to shore safe and well.

Lifeboat Helm Josh Stewart said ‘The rip current at Three Cliffs is highly unpredictable and we would advise anyone who is unsure to stay out of danger during this difficult time’.

The guidance from the RNLI remains to swim at a beach which has lifeguards on. The roll out of lifeguards onto beaches in the UK has been hindered by the virus but further beaches will get lifeguards on through the summer. If you get caught in a rip, don’t panic, float to live, swimming parallel to the shore can help. If anyone spots

someone who is suspected to be in trouble always dial 999 and ask for the Coastguard.

In Burry Port, Carmarthenshire, two boats were launched following a report of a missing child near the water.

Baking heat hit Wales, today, Wednesday (Jun 24) and the public made the most of it by heading for Carmarthenshire’s beaches.

It has been a busy time for Burry port RNLI with numerous callouts to people stuck on sandbanks.

Burry Port RNLI press officer Alun Wells said that it was great to see so many people enjoying the sun but he had concerns over safety with the lifeguard service for Carmarthenshire’s beaches not in operation.

Mr Wells who has been associated with the RNLI for many years said that it had been a busy period for the station despite it being a period of lockdown.

As people soaked up the sun two boats were launched following a report of a missing child. Fortunately the crews were stood down minutes later with the child having been found.

It made for quite a dramatic scene as the boats left the station and headed out towards the water.

Welsh Government: Reminder for people to get their spring booster in Wales