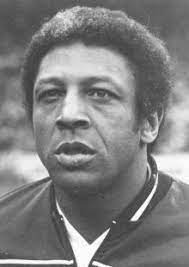 CLIVE Sullivan, the Cardiff-born sporting legend set to be immortalised by a new statue in his home city, is to be honoured at this year’s Rugby League World Cup.

Born in Splott in 1943, Clive Sullivan was the first black sportsman to captain a British national team and the last man to lead a British team to World Cup glory, when his remarkable try against Australia in the 1972 event helped Great Britain to win the title.

Though he died of cancer in 1985 aged just 42, his fame in Cardiff has long been assured and he is revered as one of rugby’s ‘Codebreakers’ – the players who controversially switched from the amateur ranks of rugby union to become paid rugby league stars. Some battled racism and prejudice before being hailed as heroes in the north of England.

Now Sullivan’s fame will reach a new generation of rugby league fans as this year’s tournament organisers have named the match ball to be used in all 61 games across the men’s, women’s and wheelchair events the ‘Sully Ball’.

It was unveiled at the MKM Stadium, the home of Hull FC where Sullivan remains the all-time leading try-scorer, and the honour recognises Sullivan as one of Wales’ greatest sportsmen who represents the core values of the tournament and the history of rugby league and acknowledges the significant impact he had on the sport.

“My father would be both honoured and humbled to see his achievements recognised in this manner,” said Anthony Sullivan, himself a former Wales dual code international. “For all the family it will be very special to see him appreciated in this way and for his name to positively impact future generations within the sport.”

In Cardiff, Sullivan will be one of three ‘Codebreakers’ – alongside Billy Boston and Gus Risman, all from the Butetown and Tiger Bay areas of the city – featured on a huge bronze statue now being sculpted by renowned artist Steve Winterburn. It will mark the contribution to the sport made by 13 players, the so-called ‘Cardiff Bay giants’, who made a huge impact on rugby league.

Cardiff Council leader Huw Thomas, the vice-chair of the committee which has so far raised £150,000 towards the statue, said he was thrilled that Sullivan’s latest honour has come at a key moment.

“The first semi-final of the World Cup will be played on the 50th anniversary of Clive’s great try against Australia and I’m sure we will be reminded of what an iconic moment it was.

“We as a council are committed to honouring all the Codebreakers and the statue will take pride of place at a key location in Cardiff Bay and ensure that their stories, and the story of the proud and vibrant multi-cultural community which helped shape them – are never forgotten.”