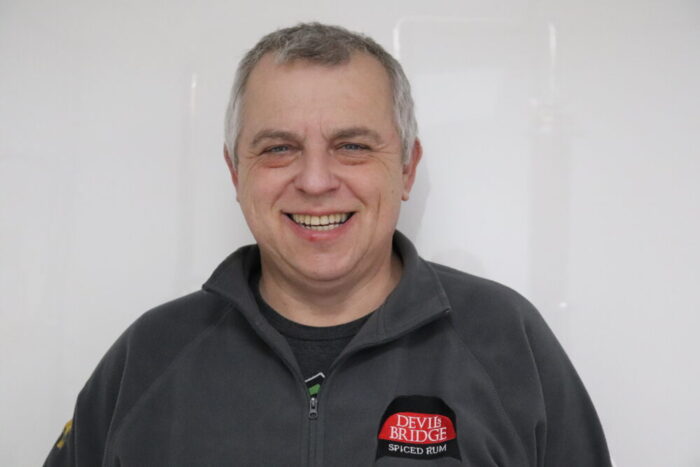 DEVILS’S Bridge Rum is the unique brand bringing one of Wales’ most iconic legends to the world – along with some of the country’s most beloved flavours.

The rum is a delicious combination of some of the finest Caribbean spirits, expertly mixed and then blended in our Carmarthenshire distillery with the tastes of Welsh heritage.

It’s inspired by the story of the Welsh lady, separated from her cow by a raging flood, who was approached by the visiting devil. He offered her a bridge in return for the first soul to cross it. She accepted, the bridge appeared and she flung a loaf of Bara Brith across, sending her dog scampering across the bridge to get his teeth into the bread.

So the devil’s plan to get his hands on the woman’s soul was foiled as the dog was first to cross the bridge. Angry at the crafty lady and her cheeky pooch getting the better of him, he vanished in a huff, never to be seen in Wales again.

So when it comes to our rum, we add Bara Brith in honour of the legend of the legendary woman and her dog, as well as Glengettie Black Tea, Shirgar Butter and a few more exotic notes like ginger, vanilla, cassia, allspice, cardamom, mace and cloves.

Distillery manager Robin Bowen, who runs the Carmarthenshire operation where the rum is infused with the local ingredients to give it a uniquely Welsh flavour, revealed the idea to add the signature taste came about at the end of a very long night of rum tastings, ideas and experiments.

He said: “We were working out how to add what we wanted to give it a really uniquely Welsh taste – we wanted this to be something totally new, modern yet traditional and innately Welsh.

“We were all sat around a table sampling rums and experimenting with lots of baking spices, like cinnamon and cloves – which are the flavours of Bara Brith – then someone said, ‘why don’t we just put a whole loaf in there?’. I’m sure it was my idea, but no one else seems to agree!

“So we added the loaf, and all the spices, along with the butter you’d normally serve with Bara Brith and the tea that’s such a Welsh staple. The results were amazing. These classically Welsh flavours really shine through and work so, so well.

“We add all these things here in the distillery after the rum comes in from the Caribbean, boil it all up and then re-distill to create our unique Devil’s Bridge Rum.

“It really is unlike any other rum you will ever try. It’s smooth and very, very good on its own, great with Coke, ginger beer or ale, or replacing either gin or rum in any cocktail.

“Most importantly it’s the taste of Wales, made in Wales by Welsh people.”

Sales Manager Rachael Griffiths is equally proud of the sensational, unique flavour – but admits the first thing that REALLY gets people hooked is the stunningly crafted red bottle and its striking design.

Rachael, who deals with buyers from Amazon to supermarkets and wholesalers, said: “The flavour of Devil’s Bridge Rum is genuinely unique – there is nothing else on the market remotely like it.

“But while the drink is exceptionally special, I have to say the bottle is the instant wow factor for everyone I deal with – and when they see it in the flesh the feedback is always that it looks even better.

“We have some intriguing plans to do more with our lovely bottles, which even tell our origin story – just like the rum itself, there is more to the bottles than meets the eye at first. There’s real depth and subtle hints and twists to both the bottle and Devil’s Bridge Rum itself. Dive in and see for yourself!”

So how did an ancient tale of tricking the devil morph into a delicious, modern and proudly Welsh rum?

Brand manager Lauren Tutssel grew up with her Welsh parents telling her the story and fell in love with the mischievous pooch who is the hero of the legend so when she was brought on board by the founders and shared the story, the deal was sealed.

Lauren said: “With the story of a woman outwitting the Devil by tossing a loaf of bread over a bridge, and her faithful dog going to fetch it, this fitted so well as a brand piece with the Bara Brith as we wanted to introduce classic Welsh flavours.

“If you look at the bottle closely, among the botanicals that create the unique flavour, you start to discover the story elements.

“So within the design is the old lady, the devil, the dog and the cow. But then it goes a step further and starts to build a modern take on a very old story, by using clever ideas such as the upside-down D as the bridge that connects all of these elements together.

“But when that D is flipped the other way, it creates horns on the top and therefore turns into the devil. The last thing we wanted was to design something that was too obvious.

“Of course the bottle had to be red – we are proud of our Welsh heritage and wanted our brand to showcase it to the world.”

And that heritage shines through in both the process – where Robin hand-labels and sends each bottle out from our Carmarthernshire distillery personally – to the taste of our rum.

It’s a unique flavour and a uniquely Welsh one at that, so whether you’re in the motherland or far away and missing it, this truly is the taste of home…with a devilish twist.

Lauren said: “My Father was heavily involved in designing items for Wales. He created the Royal Mail Wales definitive stamps amongst many other things so this felt right for me to carry on his legacy, as he sadly passed away very suddenly to cancer – we had actually hoped to work on Devil’s Bridge Rum together.

“My heart and soul has gone into this, it means so much more to me because I wanted to make my father proud with a vibrantly Welsh product.”

Devil’s Bridge Rum is available now and has been hugely successful, selling out its first batch before Christmas and securing a distribution deal almost immediately, as well as notching up impressive pre-release sales.

As we grow we plan to not only bring many job opportunities for local people, but develop a visitor centre to attract further tourism and promote the best of Wales around the world.

Covid has put some our visitor centre plans on hold, but we will press ahead as soon as we can – there are more than 60 Scotch whisky distilleries running tours successfully and we are confident our Welsh rum distillery will prove a huge tourist attraction for our area.

For more info go to www.devilsbridgerum.com