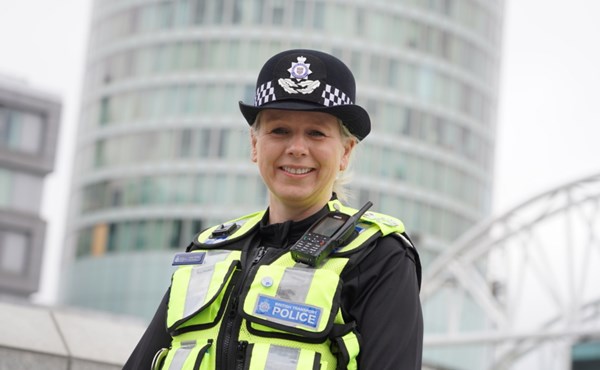 Today, the Police Race Action Plan was published. The plan will improve policing for Black people by bringing about meaningful and sustainable change in a way that it never has before. If that makes you switch off, let me tell you why I believe it to be true.

As a young officer in the nineties, I remember being instructed to attend a mandatory training course on racial awareness. I had been fortunate enough to be brought up in Leicester, a vibrant multi-racial city with social workers as parents who were passionate about fairness and utterly intolerant of bias. But this course felt like a tick box exercise in response to criticism – and in many respects it was. Sadly, that approach was never going to drive the cultural change and reform that was so desperately needed. And so, we end up back here, regrouping. Last year, the Macpherson Report: 22 Years On, found that deep rooted and unjustified racial disparities still exist throughout policing. The Joint Committee for Human Rights actually found that 85% of Black people in the UK are not confident that they would be treated the same as a white person by the police.

Recently, I’ve been looking differently and far more critically at police powers. Why we need them and how we use them. There are hundreds of powers that policing is entrusted to use every day – the scope for this work is vast. As the lead for this section of the Police Race Action Plan, I will be focussing, at least initially, on where I believe reform will have the greatest chance of reducing racial disproportionality and improving trust within the Black community. This includes powers that are felt heavily by Black people. Specifically, this workstream will focus on taser – which is six times more likely to be drawn or discharged on Black people; Stop and search – where the rate is seven times more likely if you are Black; Use of force; five times more likely to be used on Black people; and traffic stops, which is felt to be racially disproportionate, yet we don’t currently record the data in a way that shines a light on this.

What comes through to me is the extent to which Black people are being over-policed. Nobody should find this acceptable. This requires quick, meaningful action. Of course, we need to understand why this remains the case. That is a more complicated question to answer. But the ‘why’ conversation must be secondary to our acceptance – loud and clear – that we can’t go on as we are. When we knowingly use powers disproportionately against Black people – how can we ask that they put confidence in us by reporting crime and intelligence? And without this operational insight, our policing approach is inadequate, and our streets are less safe. For everyone.

I have come to realise how pervasive racism can be. It can be ingrained in all that we do, without seeming obvious. Institutional racism as a term to describe policing today is naturally divisive. An easy headline-grabber, it’s often used to hurt police officers and staff who come to work every day to keep the public safe without fear or favour. From their vulnerability, it generates a fierce and instinctive defensiveness which can lead us to miss the point. From the well-covered public backlash from some stomach-churning recent misconduct and criminal cases, it’s hard for the front line to put on a smile and feel proud to protect the public. The job can sometimes feel thankless. I wouldn’t blame anyone with a good heart who gets out of bed to keep us safe, for feeling deflated at the conditions and relentless criticism.

But personally, I find Macpherson’s definition of institutional racism difficult to challenge when I consider the collective failure of our Service to proportionately police Black communities. I agree with that. But ultimately, it doesn’t matter what I think. We are judged by the communities we serve – who choose whether or not to trust us. When Black people are significantly less likely (64%) to trust the police than white people (74%), that tells me all I need to know about institutional racism.

Until we all accept our role in becoming actively anti-racist, racial disproportionality will persist. Accepting and moving forwards means a shift in our understanding of racism from its overt forms to the effects of bias entrenched in our policies and procedures. Too often, I see police leaders comment that they are “shocked, saddened, sickened, disappointed” to hear of overt acts of racism in policing. I have done the same. Sometimes there are no better words. But what are we actively going to do to stamp it out? We should challenge ourselves to get back on to the front foot, as we would in fighting crime. There is a crisis in community confidence, and we need a paradigm shift.

I am concerned that the lack of data on the application of police powers will hold us back. To reform policing you must first understand its culture. We are and aim to be led by intelligence and evidence, which is at the core of our understanding and ability to develop policy. If we don’t understand and accept what the data is telling us, nothing will change. I worry that there are some who simply don’t want to know what the data is telling us, so don’t seek it. We will make that impossible through digestible, consistent and transparent national reporting so that the public can hold us to account for how we use the powers we are entrusted with. To show how racial bias affects how we police – in the same way it touches every aspect of our lives, especially where that might not be obvious to white people.

Although we would consider ourselves an evidence-based service, policing is under-developed in science and research. Some studies have limited validity to such a complex and diverse operating environment. We lack a common picture and a common understanding, which this plan will address, whilst pushing the boundaries of what we could do, but have never tried. There are many powers in our statute books that we don’t use. There are policies and procedures not thought of yet. New ideas could flourish into policing methods less harmful to Black people but equally or more effective in reducing crime. It is time to use evidence-based policing to try something new.

What I am quite sure of is – in that moment of individual judgement – race is not an active consideration. We want to de-escalate conflict and violence. We want to take weapons off the streets. We want to tackle the organised exploitation of county lines. We want to stop people being murdered. Speaking from what I have seen over a 30-year career, when it comes to detaining, restraining or searching, public safety is always the overriding priority.

What I am less sure of – in that moment, to what extent racial bias influences our choice to use powers and also the conscience we have around operations, geography and people and how deeply we make ourselves grapple with that from a policy perspective.

What I do know is that racial disproportionality is not ok, it’s not fair, it’s harmful and it makes us all less safe.

So what do we need to do? I believe we need to look harder. We’ve got to stop saying the data is complicated or looking the other way. In some areas, there’s enough data to act – in others, there is more to do.

Then, we need to listen better, especially during the execution and evaluation. Whether we like it or not, the top of policing is very white. In positions of power, we lack the lived experience of our own Black officers and staff, and members of the communities we serve. I’ve long been a fan of inviting feedback from my biggest critics. It’s not easy to hear, but it needs to be heard – their insight matters as it strengthens our approach. Too often I hear, “we just need to explain ourselves better”. We need to resist the temptation to justify negative interactions, even when lawful. Just because something is lawful, doesn’t mean it’s legitimate.

We need to learn more about our history. About how each interaction with a Black person is uniquely loaded with generations of mistreatment and mistrust – every action we take can be felt differently and we need to appreciate why. Historically, policing has had a shameful relationship with race, but we need to embrace it to address how the inter-generational trauma of racism takes hold of interactions today. This should be front and centre of our thinking, of our actions and all of our decisions to apply force or powers.

And after that, what else is there? Plenty in my view and we don’t need to wait to reform. I mentioned the unexplored tactics and powers in our statute books that are, as yet, untested. Let’s try something different. Is there a better way? We need to be brave in answering that. This plan gives us strong roots to achieve all of the above. It is necessary to push this now, with all our weight. So the next generation doesn’t see it as a tick box exercise. Because when community confidence is as fragile as it is, no one will tell us anything – it’s policing with the lights out.

So, to police leaders I would say – I know you care. Open your minds and get used to feeling uncomfortable by seeking out what you might not want to hear. We’re not the ones facing down these situations every day, on either side of the power. Every time you tell the public you are saddened, disappointed or shocked, ask yourself what you will personally do to change the game.

To the front-line, my message is simple. Keep doing what you do to keep communities safe from crime. The Service owes you the tools to do that better. I get that it’s hard right now. But be more curious, ask the difficult questions of yourself and others. Reflect on your interactions and understand why they might be felt differently to a Black person, despite your intentions.

And my message to Black people – I hear you. Over-policing is not ok and it can’t continue. We need and want your trust and will do more to earn it. Right now, policing is tough for the good ones – of which I promise you there are plenty. You might think this is just another review, another action plan on the scrap heap that will make no difference. I’d be naive to promise you it will stamp out racism. But I can say, this is the legacy that I, and many of my colleagues, want to leave for policing – where you trust us to keep you safe. I really do care deeply about this.

So please read the plan with a critical eye and share your feedback. Let’s please turn the volume up on this one. Talk to us, talk to each other. Keep the pressure on and offer compassion, support and ideas. We want the same future – let’s actually make it happen this time.