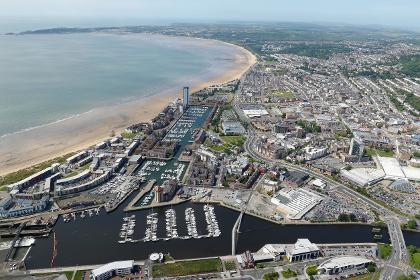 A HYDROGEN-powered ferry service across the Bristol Channel is being examined by council chiefs in Swansea.

They have held exploratory meetings with councils in Devon and Cornwall about the idea.

Swansea Council would, they said, help provide a hub for a South Wales to South West of England service.

It’s still early days, and key to the proposal moving forward would be ensuring that seaside towns in Devon and Cornwall could accommodate ferries. It could be that interested parties make a joint bid for funding in the future.

Rob Stewart, the leader of Swansea Council, said he was keen for Swansea’s maritime history to be revitalised.

Large ferries used to sail between Swansea and Cork but the service stopped just over a decade ago. Pleasure steamer Balmoral and paddle steamer Waverley have offered occasional summer sailings across the Bristol Channel for many years, stopping at Swansea and Ilfracombe in North Devon, among others.

Mr Stewart, who is a candidate again at the May 5 council elections, said: “This would be a massive boost for tourism and business – to think you could cut your travel time to Devon and Cornwall by half, and of course it would have environmental benefits too: taking cars off the road and introducing green-powered ferries.”

Hydrogen generated by renewable energy would be a major breakthrough for the transport sector, which is the largest emitter of greenhouse gases by sector in the UK. There are plans for hydrogen to be produced at the Blue Eden project at Swansea docks – a 12-year energy, housing and research initiative featuring a tidal energy lagoon, battery manufacturing and solar farm, among other things.

It’s not the first time a Bristol Channel ferry network has been proposed. A fast catamaran service capable of taking 360 passengers was planned by a company called Severn Link, with trips taking 50 minutes between Swansea and Ilfracombe.

It was hoped that the year-round service would be launched in 2010, but it didn’t materialise. Speaking at the time, Severn Link founder and chairman Chris Marrow said: “There is no question a lot of people are spending their holidays in the UK at the moment and in many ways I think it’s the absolute ideal time to be starting.”