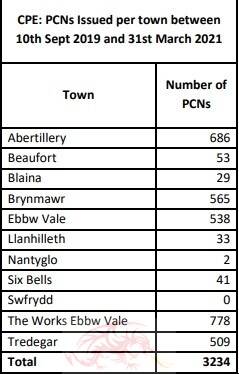 CAR parking enforcement was brought up for discussion at a Joint Budget Monitoring scrutiny committee meeting on Monday, July 26.

Since the car parking enforcement started on September 10, 2019, up to March 31, 2021, a total of 3,234 parking charge notices were issued throughout the county borough.

The total of parking charge notices issued between September 2020 and  March 2021, according to a council spokesman was 484.

From September 2019 to March 2021, the car park which saw the highest number of notices issued was The Works in Ebbw Vale, with 778, while Nantyglo had two notices issued and Swffryd none at all.

“I know this is not supposed to be a cash cow, but it’s not enough to fill a piggy bank.

“We should be receiving a lot more money.”

Head of community services, Clive Rogers said: “Members will recall when we put the business case back in 2019, based on the model that we adopted, it would just about break even.

“When we reported the first year back in October (2020) that was the case with a small surplus.”

Mr Roger said: “So, the outcome is following the model.

“It was never seen as a cash cow  for taxing our own people, it was to make sure we covered the cost and it’s doing that.”

Mr Rogers added that parking enforcement is “subject to review” and would be brought back to a scrutiny committee towards the end of the year where councillors could discuss how it had worked over the last 12 months.

“That will be the opportunity for members to review whether they want more enforcement, ” said Mr Rogers.

Cllr Martin Cook, who was chairing the meeting, asked Cllr Edwards if he was happy with the reply.

Cllr Edwards said: “No I’m not, I read in the media that every other council are doing quite well thank you very much out of this.

“It’s not just the money side of things, it’s the safety for our town centres and we’re not carrying out that original plan.”

From March 20 to July 20, 2020, parking charges were suspended due to the first coronavirus lockdown.

At that time the two enforcement officers who patrol Blaenau Gwent were redeployed to work at the New Vale Household Waste and Recycling Centre.

The annual cost of civil parking enforcement to the council is £79,500.