WE’VE probably all dreamed of living in the countryside at some point, but building a home far from the madding crowd isn’t easy.

Far from it, in fact. And it can cause tension.

But there are exceptions.

One route to rural life in Wales is through the “one planet development” policy, which is now in its 10th year.

This policy encourages a light touch on the land, self-sufficiency as far as possible, and allows for environmentally-friendly homes – which can resemble hobbit-style houses – or larger settlements.

Criteria have to be met to demonstrate a low ecological footprint.

For James and Clare Adamson, and their eight-year-old son Dara, establishing a one planet development in Carmarthenshire has involved “a leap of faith”.

The couple had yearned to live in a more sustainable way for years, and looked at more than 20 potential sites in Wales and the south-west of England before happening upon a plot of land for sale on the outskirts of Hebron. 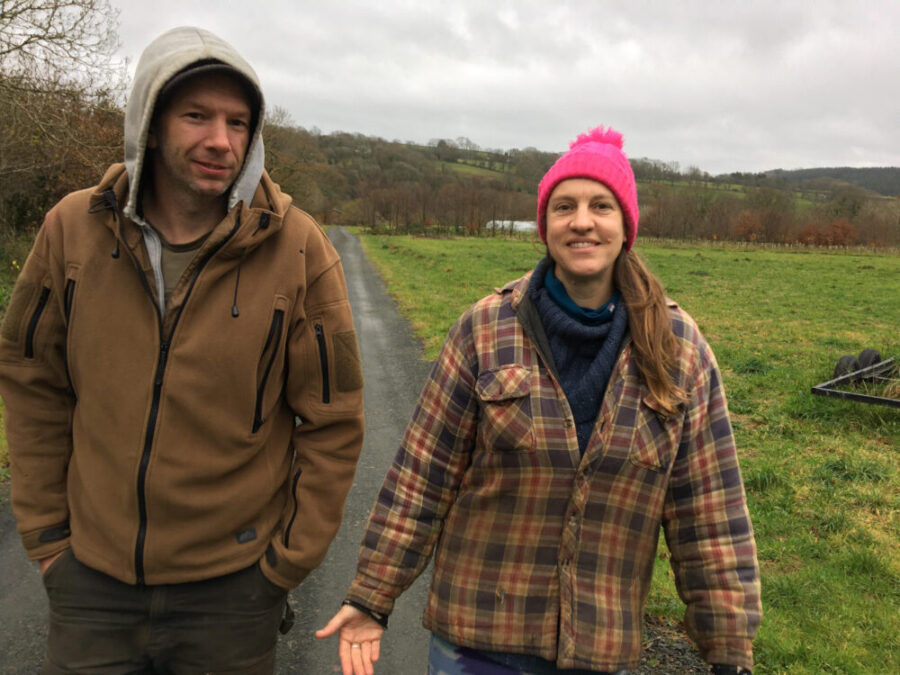 Clare said: “We walked onto this piece of land and thought, ‘home’. It was just a sense of knowing.

“We had a checklist of about 25 things, like soil, aspect, water supply.

“My husband started digging holes to see how well the soil drained – to see if it was loam, or clay.”

James, with a background in market gardening, was no novice.

“His knows his land,” said Clare.

She added: “Buying it was a bit of a ‘gulp’ moment – we had to take a leap of faith.

“But we were confident in meeting the criteria.”

The fields they bought had been grazed by horses or managed for silage.

James and Clare drew up a management plan, as required under the one development policy, in their case to create an off-grid horticultural businesses featuring two polytunnels.

This side of the venture, said Clare, was already performing well.

“It’s really good quality,” she said. “We started selling to retailers and wholesalers last year, and this year we’ve doubled it (our sales).”

The couple have planted around 2,000 trees which they’ll coppice for heating and cooking when they finally build their heavily-insulated, timber-frame home.

A small number of chickens and ducks, plus two milking cows, are also part of the plan.

Clare said it took them more than a year to draw up a planning application to Carmarthenshire Council.

The 77-page management plan sets out how they expect to meet the required ecological footprint by the fifth year.

Built into the management plan is an exit strategy, which would include the removal of buildings, if things went wrong.

The management plan covers all manner of subjects: what happens to human waste, analysis of the soil, how much wood is needed for cooking, expected income, and community impact among them.

“I would not say it’s an easy journey,” said Clare. “The criteria is quite onerous.

“This is not for the faint-hearted. I think the perception is that it’s easy, but I don’t think it’s necessarily the case.”

An audit will take place of their venture next May – marking two years since it was set up – and then again at the end of the third, fourth and fifth years.

The family of three were living in Bristol before upping sticks and moving for a short period to Devon, prior to settling in Carmarthenshire.

“The first year I was here I had a part-time job,” said Clare, who has a background in project management.

“We made a decision to get the (horticulture) business up and running before building the house.”

The couple had hoped to get the foundations of the two-bedroom timber home in by October and finish the build next August, but it has been delayed.

“It will be very simple, and blend in with the landscape,” said Clare. “We’re certainly not doing a Grand Designs.”

It is likely to mean another winter in their static caravan, which shakes a little when the wind gets up.

She said Dara had settled in really well, attended the local Welsh language school, and is now pretty much fluent in Welsh.

“It was really important to us that he learned Welsh,” said Clare. “Dara laughs at me when I try!

“And he has friends from among the local farming community.”

Prior to gaining planning permission, the family held a public consultation event in a nearby barn.

“It was really important for us to introduce ourselves, and we want to have the support of the local community,” said Clare.

“We opened ourselves up for questioning, which was quite terrifying!”

But she felt this was a crucial thing to do, and gave the family a chance to allay any concerns and address any misconceptions.

“Generally we have had a warm welcome,” said the 48-year-old. “People are interested in what we are doing.”

Reflecting on their experience so far, Clare said it could be quite overwhelming at times, given the effort required and the vagaries of the weather.

But seeing the horticulture venture blossom, new wildlife arrive and the apple trees grow bit by bit on their 16-acre site was hugely rewarding.

“To know we are living lightly – that’s really important to us,” she said. “That’s gold dust.”

Clare said the family was keen to be part of the Hebron community, and was friendly with another one planet development family nearby.

Her advice to other people considering the one planet development life was to gain as many skills as possible.

“Have a good planning head, be organised, emotionally resilient – and be grateful,” she said. “There are days you feel overwhelmed, so be grateful for something really simple, and see what you have achieved.”

She added: “I would like to leave here in a box. That’s how I feel about it.

“Things could change, but this feels like home. We’ve put in so much blood, sweat and tears.”

Clare said the whole venture, including the purchase of the land and the house, which she and James intend to build themselves, would cost around £190,000.

Asked if she had any regrets, she said: “Not doing it sooner in my life.”

There are other exceptions to the general rule about not building homes in the open countryside.

Trawl through Welsh Government planning policy, and you’ll come across a section on “rural enterprise dwellings” – essentially a means by which new homes can be built to allow rural workers to live at or close to their farm or woodland.

An additional house can also be built on established, financially sustainable farms to help the younger generation take them over or diversify them.

A home is also possible at new rural enterprises, if deemed essential.

But strict criteria have to be met.

Planning departments in Wales haven’t been flooded with one planet development applications since the policy was introduced in 2011 – approved schemes number less than 50 – but there is a perception among some residents that it’s a loophole which allows well-meaning but sometimes inexperienced people to settle on the land while farmers find it very difficult to pass their business on to family members.

Carmarthenshire councillors approved a motion last month calling for the one planet policy to be reviewed and potentially put on hold.

The debate took a colourful turn when Cllr Ken Howell recalled an “influx of hippies” descending on West Wales in the 1970s – and then leaving after a few years because they couldn’t grow the crops they needed to be self-sufficient.

Most one planet development sites are smaller than James and Clare Adamson’s, and the whole question of self-sufficiency is a tricky one. 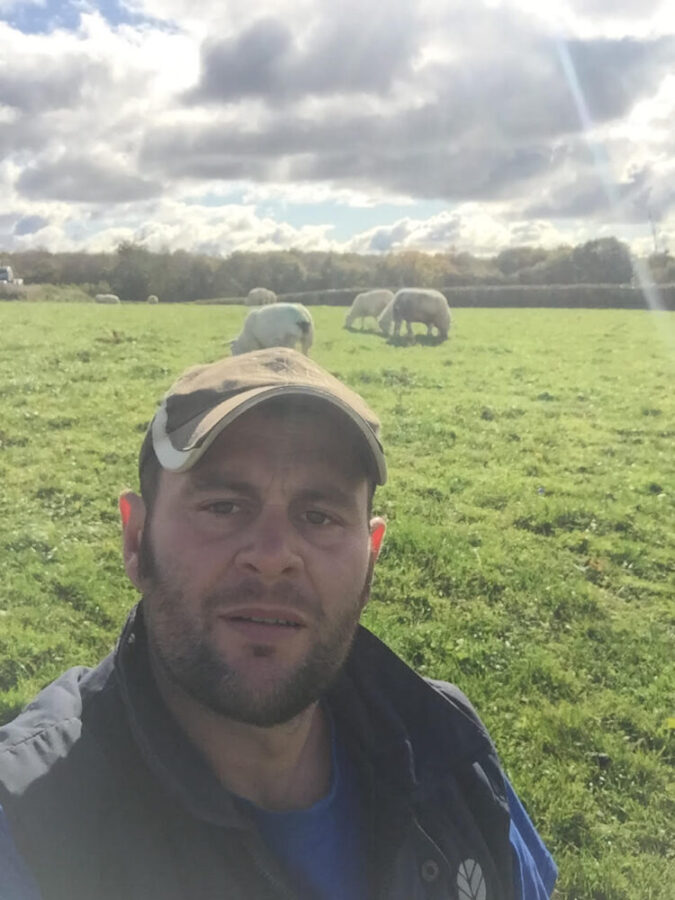 Carmarthenshire farmer Wyn Thomas said he has nothing against the likes of James and Clare, and acknowledges the good intention of the one planet development policy.

“I have got no problem with it,” he said.

But what irritates Wyn, who has taken over his parents’ 120-acre farm, is having planning permission for a bungalow within the farmyard area turned down twice.

Wyn had been renting a house with his wife Holly before taking over the farm, which is near Tycroes.

He wanted to build a bungalow for his parents, but did not want the property to have an agricultural tie, which may have allowed it to get through the planning process.

As it was, the council’s planning department said the two applications – the second submitted a year after the first one was rejected – did not fall into any of the exemptions of building in the countryside.

“There would have been no visual impact, and the bungalow wouldn’t have taken up any productive land,” said Wyn, 36.

“But being a small farm, it was not worth having this agricultural tie.

“They could have allowed us to build on the land, providing it was for an agricultural worker. But the farm isn’t big enough.”

The farm used to have milking cows, pigs and sheep, but now just has sheep.

Wyn has a part-time job as well as managing the farm – bringing in contractors when necessary. Holly also works.

In the end, Wyn’s parents moved into a bungalow in Tycroes.

Wyn, who is the fifth generation of the family to farm the land, said the situation had been upsetting.

Referring to the one planet development policy, he said: “It’s a grand idea, don’t get me wrong.

“But if it’s five or six acres, you can’t be self-sufficient. Especially without fertilisers.

“For people who don’t have an understanding, I don’t think they will succeed.

“And if they get cows and chickens, are they classed as commercial animals or pets? It’s a minefield.

“It’s a shame I have not been able to provide a home for my parents where they worked all their life. It’s hard to swallow.”

Planning consultant Graham Carlisle said the rules about building in the open countryside have always been really strict.

“You have to have a really good reason to do it,” he said.

“Nobody in their right mind would want to see the countryside dotted with houses.”

Mr Carlisle, of CDN Planning, Swansea, said there were exemptions, as listed in the relevant Welsh Government planning advice note.

Anything that wasn’t an exemption, he said, would create a precedent.

He said: “Once you start relaxing a policy, people like me will start quoting precedent at you.”

Mr Carlisle said the one planet development policy was a route by which to build in the countryside.

“But you still have to jump through hoops and loops to do it,” he said.

Phil Roberts, a Carmarthenshire-based planning consultant, said the one planet development policy was “incredibly complicated”, with the potential for buildings to be taken down if the criteria isn’t met after five years.

He said he was a fan of it, but felt it should be tailored more to local needs.

Mr Roberts said there was a growing affordability problem in Pembrokeshire in particular.

“People are flooding in to buy property – it has gone completely out of reach for local people,” he said.

These local people could include farmers who wanted to build a home for the younger generation but found it very hard to do so.

Mr Roberts said he felt there was a strong case for affordable housing to be built in appropriate locations in the countryside, provided there were employment opportunities, nearby shops and public transport links.

He stressed he was coming at this from purely an economic point of view.

“We are not dealing with this issue properly,” he said.