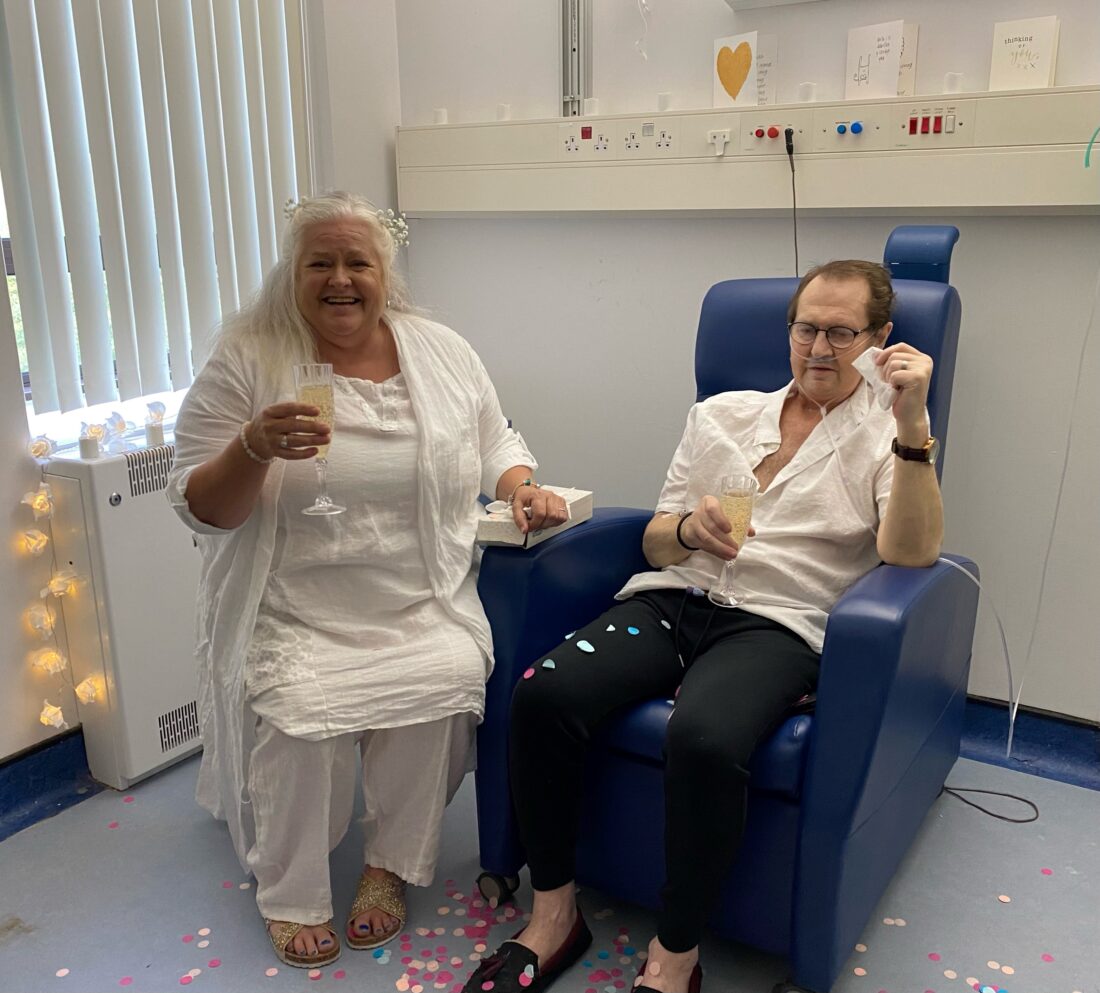 A newlywed couple have thanked nurses in Morriston Hospital for helping them tie the knot on the groom’s ward.

When Robert Pritchard, who has cancer, was delivered an uncertain prognosis he and his partner, Rose, decided to exchange wedding vows without further ado.

The ceremony, which was held on Ward T on the last Sunday of May, took less than a weekend to conceive, plan and carry out, but had been in the making for more than 20 years.

The new Mrs Rose Pritchard, who is from Llanelli, explained: “We’ve been together for nearly 21 years and although Rob proposed to me three years ago, after being diagnosed with cancer, life got in the way and things didn’t happen.

“Then, a couple of weeks ago, he was admitted to Morriston Hospital.

“They haven’t said how long he has got but it doesn’t look very good. He’s getting worse to be honest.

“Knowing that he isn’t going to be in this world for very much longer, we had to make the decision to do it here and now. We decided to do the right thing.”

The decision to get married more or less straight away was a mutual one.

“A friend of mine, who is a minister, suggested, ‘Why don’t you do it now?’” said Rose. “We both agreed and said ‘Why not?’. That’s how it happened. It was a mutual proposal.

“Once we had made the decision I spoke to Sally, the ward sister, and she was a Trojan. She made it happen. If it wasn’t for her I don’t think me and Rob would have done it. She gave us all the guidelines and all the support, and we did what we had to do.”

Of the ceremony itself Rose, who wore a white linen suit for the occasion, said: “My two daughters came – my son is away at the moment – to witness it.

“It was magical to be honest with you, better than I ever imagined it would be.

“Obviously we couldn’t go away on honeymoon but we had a lovely chilled evening together, in the room, it was so nice.

“I want to say a huge, massive thank you to the staff. I will never, ever forget what they did for us, and I will always be grateful.”

Ward Sister, Sallyanne Greenfield, said: “It was the first time in all my years of nursing that I had received a request for a couple to marry on the ward.

“First I asked our matron if she would be happy for us to arrange it and she said, ‘yes.’ Then I contacted one of our chaplains to see if he had any advice and, fair play to him, he came up within 15 minutes with all the paperwork.

“We had to get the doctors’ permission as well, which they willingly offered, then Rose had to go and meet the registrar in Swansea.”

The ceremony was low key, for obvious reasons, but was something that all who were part of will never forget.

Sallyanne said: “It was myself and a couple of others, who were on the ward on the Friday who discussed how can we make this happen and how can we make it special for them – because it’s a busy acute ward environment.

“We got together and bought some things out of the ward funds, such as balloons and battery-operated candles, to decorate. We also bought some non-alcoholic champagne and a cake – so they could cut the cake.

“We didn’t tell all the staff that it was happening because we didn’t want it to be overwhelming – just the people who were in that day.

“It was extremely touching. The most rewarding experience and a real honour to be involved in it all. I’ve been in nursing for 31 years and I have never felt like that for anything. It’s something that I will never forget.”