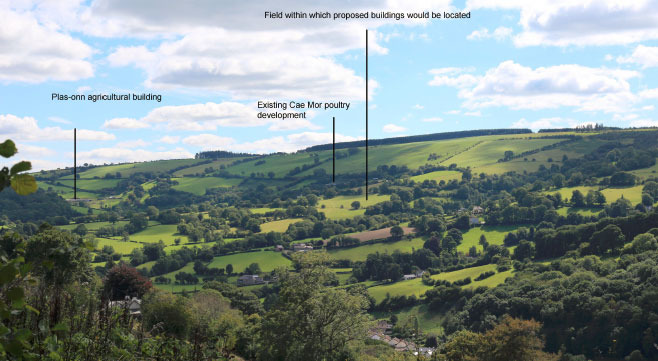 A DECISION on plans to create an egg-laying facility housing 24,000 chickens at a farm in Wrexham has been placed on hold.

Councillors met Monday, June 13, to discuss an application by the owners of Cae Mor Farm in Pontfadog to expand their free-range egg-producing business.

The organic farm run by Julian and Emma Morris is already home to a production unit which accommodates 16,000 hens after planning permission was granted on appeal in 2017.

They now want to create four new buildings at the farm in the Ceiriog Valley, which would each house an extra 6,000 chickens.

The proposals were recommended for refusal by a senior official from Wrexham Council after he raised concerns over the scale of the development.

A petition against the scheme also attracted more than 82,000 signatures after it was set up by a resident from nearby Llangollen.

However, members of the local authority’s planning committee chose to defer their decision in order to visit the site and assess the visual impact on the surrounding countryside themselves.

Planning committee members voted by nine votes to four in favour of carrying out a site visit, which will take place on Friday, June 24, before making a final decision.

“I’m conscious that across the way from this application there was another application some time ago which was refused.

“It was subsequently agreed by Welsh Government and I’m not sure the officers want to go down that route again.

“Personally, I think we should agree to deferment as the last thing we want is for this application to go for refusal and then be passed again by Welsh Government like the other one.

“Looking at the reasons for refusal, it seems to suggest a lack of information which I know the applicant is keen to come back and address.”

A total of 36 formal objections were raised against the plans ahead of the meeting, highlighting issues such as increased traffic and the impact of noise and odour from the facility.

The council’s interim chief planning officer said in a report that he was concerned about both the visual impact of the buildings and the scale of development.

Ian Jones’s recommendation to refuse the scheme came despite consultants acting for the applicants claiming it would create jobs and help keep the business running.