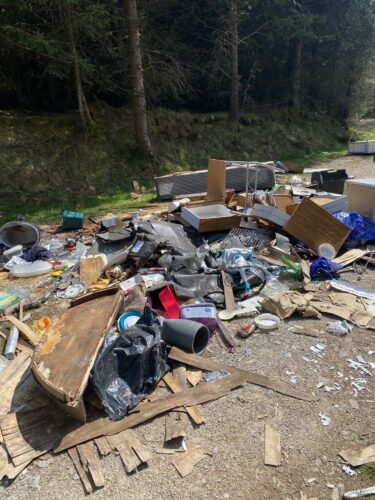 WAITS of up to six weeks to get bulky items such as old fridges and sofas collected by a local authority “will cause more fly-tipping”, says a councillor.

That’s the stark warning from Denbighshire councillor Glenn Swingler after householders in the county awaiting bulky waste items collections were informed of the delays via the council’s website.

A spokesman for Denbighshire council said national driver shortages and staff self-isolating because of Covid were to blame for the problem and a private contractor had been engaged to try to reduce the backlog.

It left the county’s residents, who need to dispose of large household goods, in a difficult position as they will have to keep them for longer – a particular problem given the boom in the housing market.

Cllr Swingler said the authority would have to pick up the goods one way or another.

He said: “I’m not surprised it’s taking that long to collect because of everything going on but it will automatically lead to more fly-tipping.

“I’d like to know what the council is doing to get extra workers in, otherwise the workforce will be spending its time clearing up the fly-tipping.

“Without extra staff we just move the problem further along the chain.”

The national driver shortage has been attributed to Brexit, Covid and other factors and the Road Haulage Association has estimated the UK is 100,000 drivers short of the pre-pandemic total of 600,000.

Many of those drivers were from eastern European countries and it has said it believes the industry was 60,000 drivers short even before Covid hit.

Two days ago the UK Government announced the Driver and Vehicle Standards Agency (DVSA) would be recruiting an extra 40 “vocational driving examiners” to help get more HGV drivers on the country’s roads.

The spokesman for Denbighshire council said: “We are currently experiencing difficulties with our bulky waste collection service.

“This is a result of staff needing to isolate due to track and trace as well as issues in recruiting drivers to fill permanent posts and a lack of agency drivers available to backfill staff absences.

“The Council is currently prioritising services which have the greatest impact on the health and welfare of residents such as food waste, refuse, recycling and garden waste collection.

“The Council has engaged a private contractor to undertake bulky collections on its behalf and is making progress in clearing residents’ outstanding collection requests.

“We would like to thank residents for their patience and understanding at this time.”

If bulky items are too large to fit into a car or single-axle trailer, you can only take them to a recycling centre using the following vehicles if you have a permit:

However you can only get a permit if those vehicles are registered to you, so residents can’t even hire a vehicle to get rid of goods themselves.