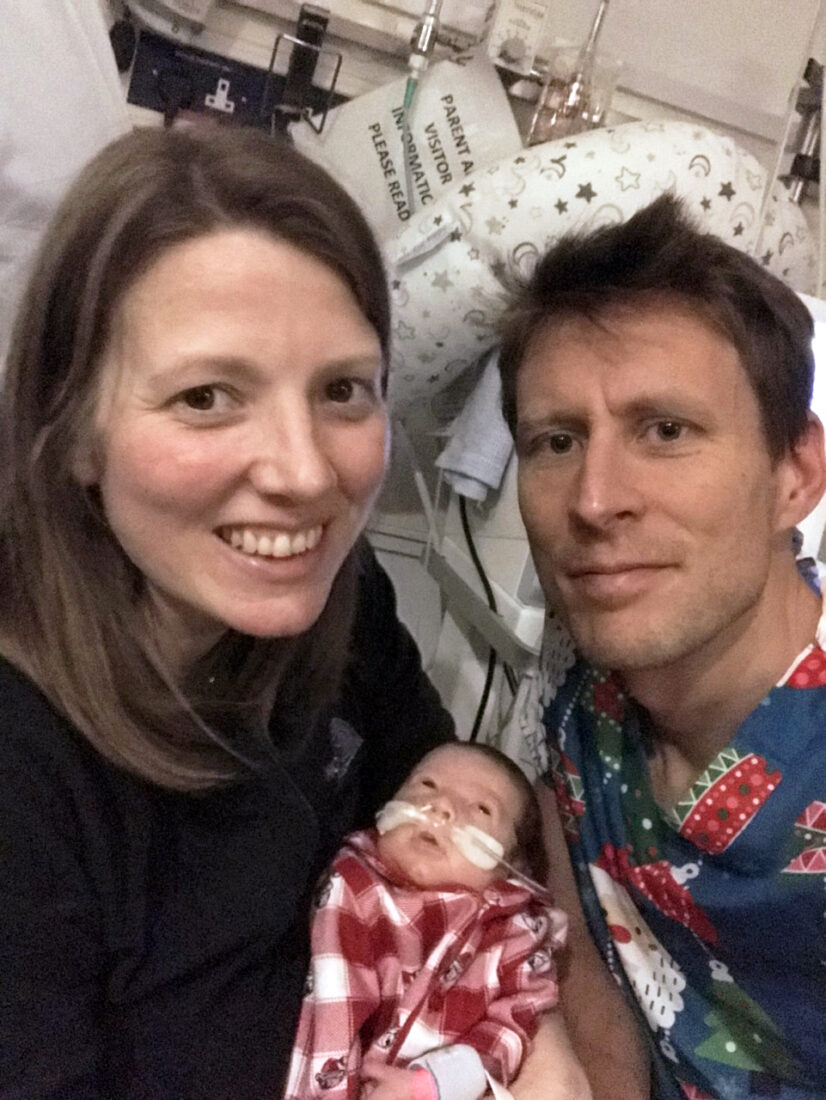 A Swansea doctor working in Africa had to race halfway around the world back to Wales after his wife went into labour 11 weeks early.

Mikey Bryant watched the baby, their first child, being born via a video link with Singleton Hospital, while hurriedly booking flights so he could join his newly-expanded family.

Baby Finley spent seven weeks in the hospital’s Neonatal Intensive Care Unit, or NICU, before the couple were able to bring him home.

Now they have launched a £10,000 fundraising appeal to support a very basic neonatal unit Mikey created at the Liberian hospital so newborns there can have the same outstanding care Finley received.

Bethany, herself a junior doctor who is training at Singleton Hospital to specialise in paediatrics, had finished working in NICU just a week before going into labour last November.

She woke one morning feeling unwell. With contractions starting, she phoned for an ambulance which took her to Singleton.

“It was quite clear when I arrived that I was already in labour and dilated and that they weren’t going to be able to stop him coming” said Bethany, who worked in Africa with Mikey before her pregnancy.

“Finley was 4lb, a good size considering how early he was, and that stood him in good stead.

“He needed some support, but not much and when the blood tests came back everyone was very reassuring.”

Mikey, meanwhile, had completed his round on the Liberian hospital’s malnutrition work and was just about to do the same on the newborn ward when he had a message to say Bethany had gone into labour.

“I called one of Bethany’s friends who is a midwife in Singleton. She answered and I watched the whole thing on WhatsApp video,” he recalled.

“The team at Singleton knew I couldn’t make it there and they very kindly allowed that to happen.

“I obviously had to fly straight back so there was some frantic run-around in between watching Bethany go through the labour and getting a flight, and getting a Covid test to get out of the country and back here.”

The journey involved a drive of several hours to the airport in Liberia, followed by two flights; one into Europe and the second into the UK.

The trip from door to door took 24 hours in total. But then self-isolation requirements meant Mikey had to wait two further days before he could finally go to Singleton to see his newborn son.

“What was so strange was going from caring for these tiny babies in Liberia to suddenly having one of our own in the unit in Singleton – a very odd, sudden change,” he said.

Finley remained in NICU for almost seven weeks as he needed support with his breathing and feeding.

His parents, who commuted to the hospital every day, were finally able to bring him home in January and he continues to do extremely well.

It is certainly a happy ending, and one which has inspired the couple to fundraise to ensure a similarly happy outcome for newborns in Liberia.

Child mortality rates in this impoverished West African country are among the highest in the world. Mikey and Bethany arrived there in January 2019 to set up a programme working mainly with malnourished children at the ELWA Hospital in the capital city of Monrovia.

Since the programme started, child deaths due to malnutrition have fallen significantly. Training is also being provided to upskill Liberian healthcare staff, with 300 of them already attending a World Health Organisation’s ETAT (Emergency Triage Assessment and Treatment) course.

Mikey and his team have also created a five-bed paediatric emergency department and a busy clinic for children under five years old.

Since its inception, more than 20,000 children have been treated by this programme.

The project was expanded last November with the creation of a six-bed neonatal care unit with a new oxygen system, fluid management protocols and organised treatment plans for unwell newborns.

At the time this was established, Mikey and Bethany could not have imagined their own baby son would be needing the same kind of intensive care only a matter of weeks later back home in Swansea.

“The newborn area in the Liberian hospital is very basic, with only one working incubator, but at least it exists now,” said Mikey, who while in Liberia works for Swansea Bay 10 hours a week as an out-of-hours GP providing telephone medicine.

“What we’re trying to do is make sure we have enough supplies and medicines and various feeding tubes and things to actually keep people going. It’s a huge challenge.”

The couple have worked with Swansea Bay Health Charity to set up a JustGiving page so they can continue the good work in Liberia.

They will be taking Finley on his first trip there when they start a seven-month visit later this summer.
Bethany said: “We were so fortunate for the outstanding care that Finley received at the Singleton unit and we want newborns in West Africa to get the same care he did.

“These babies’ lives can be saved if we work together. We are so thankful for the care and encouragement many have shown in supporting the work to care for the children in Liberia.”

You can support the fundraising appeal here:
https://www.justgiving.com/fundraising/michael-bryant11
Swansea Bay Health Charity is an umbrella charity that uses more than 265 funds to improve patient and staff welfare within the health board area, as well as supporting the work in Africa.
Found out more about the health charity here: https://swanseabayhealthcharity.wales/