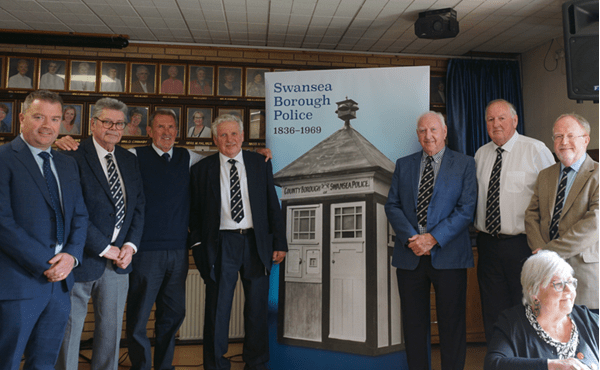 On Friday 20th May, the former officers of the Swansea Borough Police held a reunion at Morriston Golf Club in Swansea. Over seventy guests were in attendance to celebrate old Swansea force, which existed from 1836 until the south Wales force amalgamation in 1969.

The event was opened by former Swansea and South Wales Police officer, Leighton Jenkins, who spoke about the history of policing in Swansea, which provided those in attendance with a chance to share stories and reminisce about their days in blue. Leighton, who joined the Swansea force as a Cadet in 1958, told us:

“A lot of the ex-bobbies meet up and chat over a coffee – but to get them all together in one place is very difficult. It’s very special that we’re here today and it’s very important that we do this, that we meet like this.”

Superintendent Steve Jones, who was at the event representing South Wales Police, added:

“It’s been great to be here today, especially since my father was a Swansea Borough Police Constable. I’ve thoroughly enjoyed catching up with old friends and former colleagues and listening to their stories from their days in service.

The last two years have been difficult for us all, so it’s been especially heart-warming to see so many friends re-connect and share their memories of policing in Swansea. The history of the Swansea Borough force will never be forgotten. I often look at the plaques in the new Swansea Central Police Station that pay tribute to the officers who lost their lives during the two World Wars.”

An event programme was created for the occasion which details a brief history of policing in Swansea and features photographs of policing through the ages. It can be viewed here