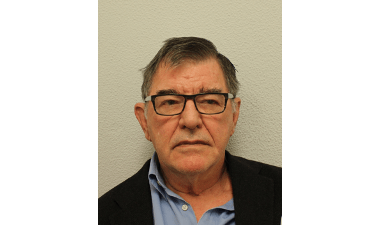 Individual in question facing forwards.Victor Melleney, 76, who previously worked on programmes such as Panorama and Question time, also pleaded guilty at an earlier hearing to four counts of possessing a prohibited weapon.

He was arrested by National Crime Agency officers at his Kensington flat in October 2018. The weapons – three tasers and a pepper spray – were recovered following a search of the flat and his Porsche.

Officers also seized Melleney’s laptop and iPad from this address.

An external hard drive, which he initially attempted to hide in his pocket, was recovered from the bathroom of the flat.

His devices contained over 800 images and videos of child sexual abuse (categories A-C) and he had downloaded four different Peer 2 Peer file sharing applications onto them.

Analysis showed that the keywords he used to search for the material included “PTHC” (Pre Teen Hard Core), “Preteen” and “11 yo”.

In March 2019, NCA officers executed a warrant at another of Melleney’s properties in West Wittering, Chichester, as intelligence showed that he had also accessed child abuse material from the address in the month prior to his arrest.

Melleney was found guilty of possessing indecent images of children at Kingston Crown Court on 17 December 2021. He was sentenced for this, and the prohibited weapons offences, at the same court today (14 January).

“Melleney had a significant collection of child abuse material, which he obtained from the internet.

“It’s really important not to forget that behind every sexual abuse image is a child whose life has been cruelly torn apart by an abuser, with men like Melleney fuelling the demand for such material.

“Protecting children and targeting those who pose a sexual threat to them remains our top priority.”

“The hard drives, recovered from his home, his basement, and hidden in the pocket of a dressing gown he was wearingwhen he was arrested, contained sickening videos, part of a collection downloaded over years.

“The sexual exploitation of children and the distribution of images like this is an utterly abhorrent practice and one which the CPS and its partners will continue to work to root out.”