Eye-catching new development in Swansea to be assessed by planners 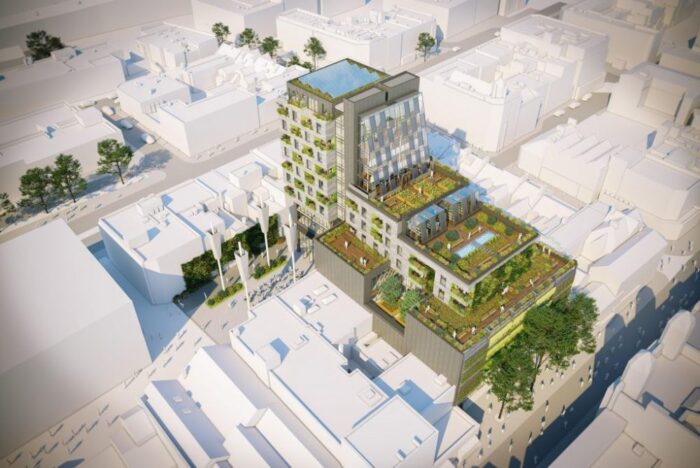 AMBITIOUS proposals for a building of the future are being examined by Swansea Council planning officers.

The city centre scheme would have trees and plants on it, plus greenhouses and fish tanks.

Dubbed Picton Yard, it would provide flats, shops, offices, educational spaces and a courtyard, and stretch from Oxford Street at the front to Picton Lane at the rear.

The Hacer Developments proposal was first unveiled in November, and a raft of documents and drawings have just been submitted to the council as part of a fresh planning application.

The scheme comprises the former Woolworths building on Oxford Street, joined to a new 12-storey tower at the rear.

The planned courtyard area at the rear would be covered and used for outdoor eating, market stalls, concerts and outdoor film screenings.

A planning statement on behalf of Hacer Developments said the proposal would make a significant contribution to the wider regeneration aspirations of Swansea city centre, and create a destination in its own right. “It is considered that the proposed development would be compatible with the townscape character of the surrounding area, and would enhance both the site and its surrounding, creating an attractive new piece of townscape and providing a contemporary landmark for the city,” added the report.

The council is keen on so-called green infrastructure for new city centre developments, and is expected to unveil its own proposals for a modern office development at the former Oceana site on The Kingsway, linking through to Oxford Street.

The Design Commission for Wales has made written observations on Hacer Developments’ scheme, especially about how the urban farm-style greenhouse set over four floors would operate.

The commission is supportive of the ambition shown.

Plants and vegetables in the south-facing greenhouse would be grown in water and nourished by waste pumped up from fish tanks at the bottom of the building.

The waste water would then be filtered and channelled back to the fish tanks.

The idea is that a community organisation would use the large greenhouse, while residents could grow produce at two single-storey greenhouses lower down the building.

The 44-flat tower would be sold to a social housing provider, and no on-site parking is proposed.

Speaking last November, David Dolman, of Hacer Developments, said: “We need to rethink how we live and work in the urban environment. We are trying to explore new ways of bringing nature in, and encourage a sense of community.”