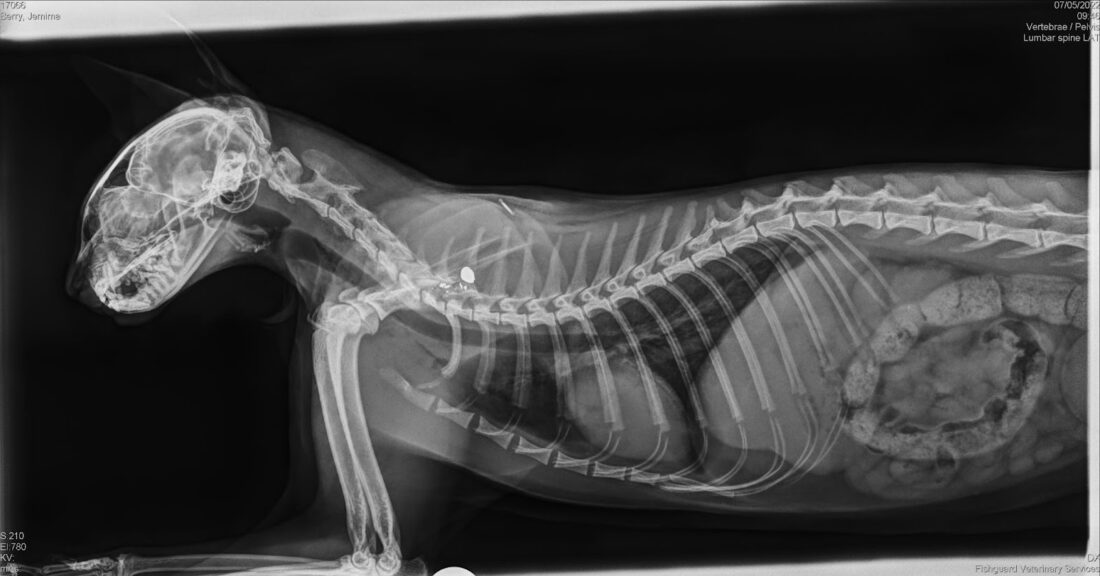 A family has highlighted the suffering of cats following a spate of air gun attacks on the animals in West Wales.

Jemima has been left with a pellet lodged between her shoulder blades and her spine.

People who indiscriminately target animals with air guns are being urged to think about the devastating consequences of their actions following the shooting of three cats – two of whom did not survive – in Pembrokeshire.

Jemima, a two-year-old tabby cat, may never fully regain her mobility after she was targeted near her home in the Plas y Fron area of Fishguard on 6 May. The pellet, which entered just below her neck, came to rest between her shoulder blades and just milimetres from her spine – and has been deemed too risky to remove.

Another female cat was also shot the previous evening (5 May) in a neighbouring street, Dan y Bryn, and taken to a vet, where an x-ray revealed she had been shot twice with an air gun. She sustained a broken leg – which had to be amputated – and a shattered shoulder. Despite making good progress initially, she took a turn for the worst and sadly had to be put to sleep a few days later.

A third incident occurred seven miles away in Newport at the beginning of the month, with a vet confirming that a cat’s fatal injuries had been caused by an air gun.

The RSPCA, which last year received 454 calls about animals being shot, injured or killed with air guns, is appealing for information about the incidents.

Jemima’s owners, who initially thought she had fallen or been run over, say they are cautiously optimistic that she is now out of immediate danger, although her long-term prognosis remains guarded.

They said: “When we found Jemima, she was unable to walk, and had no use in her hind legs. We are incredibly lucky that the projectile did not strike any vital organs or any blood vessels, however it seems that the swelling caused by the impact of the fragments might be affecting the nerves to her legs.

“She is making a slow recovery at home and with treatment has started to gain the use of her legs, albeit slowly. She’s now able to move around more independently, walking with a pronounced limp, and we see improvements in her mobility every day.

“She has always been a very active cat who enjoyed being outside but her life has now changed completely. She can’t go out and doesn’t understand why she can no longer jump up or run around like she used to.

“People aren’t aware of the damage airguns can do to animals and perhaps if they did, they would think twice. They need to realise there are lasting consequences to their throwaway actions, not just on pets, but for the people who care for them. Jemima survived by a matter of milimetres but we don’t know whether she will ever fully walk again and whether her current condition is the best we can hope for.

“We’re shocked and horrified that somebody living near our house has willfully inflicted this cruelty on our family pet, and we are very concerned about reports of other occurrences like this in our area. We hope that our community will remain vigilant, and that any further incidents are reported to both the police and the RSPCA.”

RSPCA inspector Keith Hogben is urging people to come forward with information about the attacks and to report suspicious behaviour to the animal welfare charity.

He said: “Jemima was extremely lucky to survive this callous shooting and I sincerely hope she continues to make positive progress in the weeks and months ahead.”

“Sadly we tend to see a rise in these mindless attacks when the weather warms up and people are spending more time outside. We also saw a significant number of cases during the national lockdown months.

“The RSPCA continues to call for stricter regulations around owning an airgun in both England and Wales. Better education, basic safety training for owners and a thorough explanation of the law – including our legal obligations towards animals – could help protect countless animals from these horrible attacks in the future.”

Anyone with information about the shootings in Pembrokeshire should call the RSPCA’s inspectorate appeal line on 0300 123 8018.