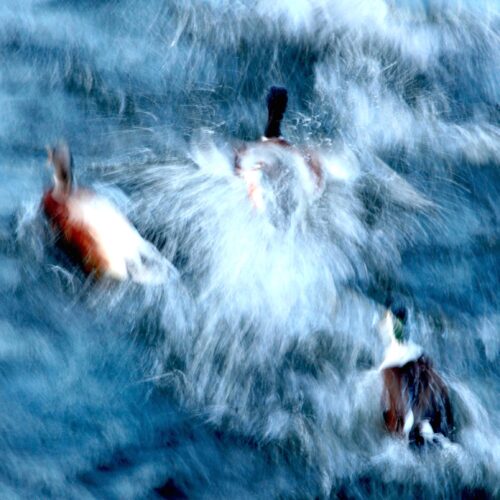 A flock of ducklings were rescued by an RSPCA inspector and firefighters after they fell into a storm drain in South Wales – before being lured out by officers playing duck sounds on their mobile phones.

The five tiny ducklings – thought to be about a week old – became trapped in the drain yesterday morning (5 May) after they had followed their mum across Llantrisant Road in Graig, Pontypridd.

While the mother duck and several of her babies managed to safely go over the storm drain and climb into a hedge, five of her ducklings did not and they fell through the grate and disappeared from view.

The incident was witnessed by a motorist who then called the RSPCA for help.

RSPCA inspector Sophie Daniels attended the scene, but it became clear that she would also need assistance from the South Wales Fire and Rescue Service to rescue the stricken birds.

A retained crew from Pontypridd Fire and Rescue Station arrived and lifted the heavy drain, shining their torches into it while Sophie reached down to try and reach the ducklings.

The firefighters also closed the busy country road in one direction and managed the traffic to allow the two-hour operation to take place.

Slowly but surely, all five ducklings were rescued unharmed, enticed out by duck noises which the officers played to them on their mobile phones.

Sophie said: “These sorts of rescues take time and require patience because the ducklings can disappear along connecting side pipes, which is what they kept doing. So we got out our mobile phones and started playing duck sounds to try and entice them back into the main chamber where I could reach them.

“We were there for a good couple of hours, but the firefighters were absolutely determined to get them all out. The drain was too heavy for me to lift on my own, and it’s quite a fast country road, so their support was fantastic.

“It was a real team effort and everyone was really pleased when we finally brought all the ducklings to the surface with nothing more than a few ruffled feathers. It’s another reminder of what we can do together for animal welfare. As always, we are incredibly grateful to the fire service for the compassion and care shown by their officers when we need to call on them for help.”

A spokesperson for the South Wales Fire and Rescue Service said: “Crews assisted an officer from the RSPCA to successfully rescue five ducklings trapped in a drain. We will continue to work alongside our partners to help protect wildlife and keep South Wales safe.”

Because the mother duck and her other babies are highly unlikely to have remained in the same place, the rescue ducklings will stay in RSPCA care before being transferred to a local wildlife charity where they will be looked after before they are old enough to be re-released.