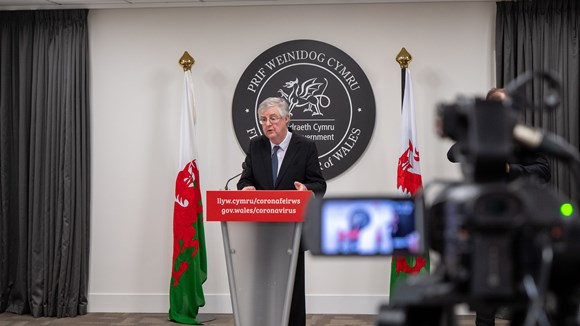 The First Minister gave the latest figures from the Office for National Statistics and Public Health Wales highlighting a decrease in the R number latest estimate a week ago between 0.9 and 1.2 and the number of cases of Covid-19 fallen by 40% compared to when the firebreak period was instituted, but he stressed that there were still more than 50 hospital wards full of people seriously ill with Covid-19. He stated that there had been more than 3,100 Covid-19 related deaths in Wales this year. “Deaths are back to their highest levels since mid May,” he said..

The First Minister took time to acknowledge the experience of the families of all those who have died in the second wave of Coronavirus.

Looking ahead the First Minister said that what happens now depends on how we all act. “Most people in Wales go on sticking with it. Doing whatever they can to help turn back this deadly virus but this is not universally the case. Our police forces have reported in the post firebreak period that they have had to respond to more than 1,000 Covid-19 related incidents. Where the behaviour of a selfish minority is putting everybody else at risk.”

We asked the First Minister: When Magistrates’ courts across Wales are ending the day with tens of thousands of pounds in the kitty as a result of people breaking restrictions if there a case for diverting some of that money to deserving projects dealing with Covid-19 such as food-banks and additional support for carers in Wales. We asked if it was a process Welsh Government were involved with looking into at present.

He said: “Magistrates’ Courts are not the responsibility of the Welsh Government. Any money that is raised at a Magistrates Court goes directly to the UK Government, back to the treasury in London. We have no say in how it is raised or what is done with it. Our fixed penalties in Wales are not designed to raise revenue. That is not at all why they were introduced they were in order that our police and our other enforcement agencies have the tools they need to deal with people who deliberately and knowingly break the rules. When that money is collected at a Magistrates’ Court, it is for the UK Government to decide where it goes and what use is made of it. It doesn’t touch the sides of the Welsh Government in the process I am afraid.”

The First Minister pointed to Northern Ireland and Scotland’s recent lockdowns He said that he did not want Wales to go into another lockdown and that there was no room for relaxation. ‘Everyone must play their part’ he insisted and stressed the need for people to reduce the number of people they are in contact with, continue to work from home and to avoid unnecessary travel.

The First Minister said that the Welsh Government was meeting with the other home nation governments with collaboration between the Chief Medical Officer of the home nations also taking place.

When asked a bout the publicity surrounding a vaccine the First Minister expressed caution saying that he was suspicious of the UK press reports and that he would stick to a plan people could rely on for Wales rather than eye-catching headlines.

The First Minister ended his briefing with a stark message saying: “Covid-19 is still here, it still remains a deadly disease.” He signalled that the firebreak had succeeded and that Wales has a pathway to Christmas but he said that it was in the hands of the people of Wales.

We questioned the First Minister on planning issues. We asked; one of the major impacts of Covid-19 has been the pressure on local authorities and the cessation of planning meetings. Those who would exploit the situation including developers have had free reign to begin building on green field sites across wales opting for retrospective planning as and when things get back to normal at county hall. Does the First Minister have concerns that local authorities have lost control over planning and developers and is there not a case for a moratorium on building on green field sites in Wales?”

The First Minister replied: “I am concerned to hear what you say. I understand all local authorities have had to operate differently during the pandemic. Developers certainly do not have carte blanche to build on green field sites. It is high risk indeed to assume that you will retrospectively be able to get planning permission if you have built in places, which are not in accordance with a local authority local development plan. Indeed we have strengthened the rules here in Welsh Government so that if a local authority does give permission for building to happen on land that is not in their local development plan for housing purposes then that decision must come in here to the Welsh Government precisely to avoid building on green field sites. You have alerted me to the issue and I will make sure our officials will have a look at what you have said.”