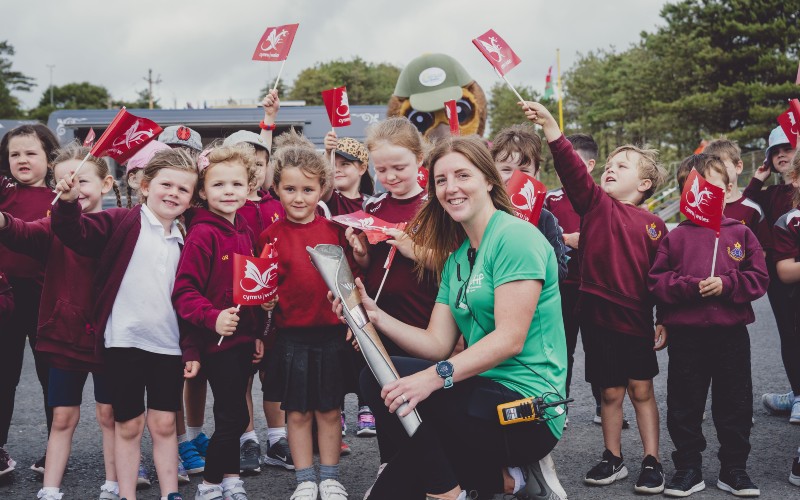 CROWDS of people turned out to celebrate the Birmingham 2022 Queen’s Baton Relay in Carmarthenshire.

It was then taken via toboggan, skis, bike and beach wheelchair to Cefn Sidan beach and into the safe hands of the RLNI who transported the Baton by boat to Burry Port Harbour.

Cabinet Member for Regeneration, Leisure, Culture and Tourism Cllr Gareth John was amongst those to receive the Baton at Burry Port Harbour before it was handed to the Silver and Gold Sports Young Ambassadors from Carmarthenshire’s secondary schools who took it in turns to run and cycle along the Millennium Coastal Path to North Dock in Llanelli.

Here the Baton was welcomed by Council Leader Cllr Darren Price along with a number of inspiring Carmarthenshire athletes who will be representing Wales at the Commonwealth Games.

The celebrations continued into the evening with a range of health and wellbeing activities taking place, organised by the council’s Actif sports and leisure team. These included a junior aquathon, stand-up paddleboarding, aquafit classes, spin classes and beach-lifesaving sessions

Cllr John said: “It was a wonderful day for Carmarthenshire, and it was great to see so many people had turned out along the route to join in the excitement.

“I would like to thank everyone involved in organising this event, and congratulate all the Batonbearers on a job well done, what an experience and honour it must have been for them.

“I would also like to wish good luck to all our Welsh athletes who will be competing at the Commonwealth Games in Birmingham next month.”

The Birmingham 2022 Commonwealth Games will be held from July 28 until August 8. The Queen’s Baton Relay is travelling across the Commonwealth in an epic journey to all 72 nations and territories bringing together communities to join in the celebrations in the build-up to the Games.