Gull rescued from net by RSPCA and Fire and Rescue Service 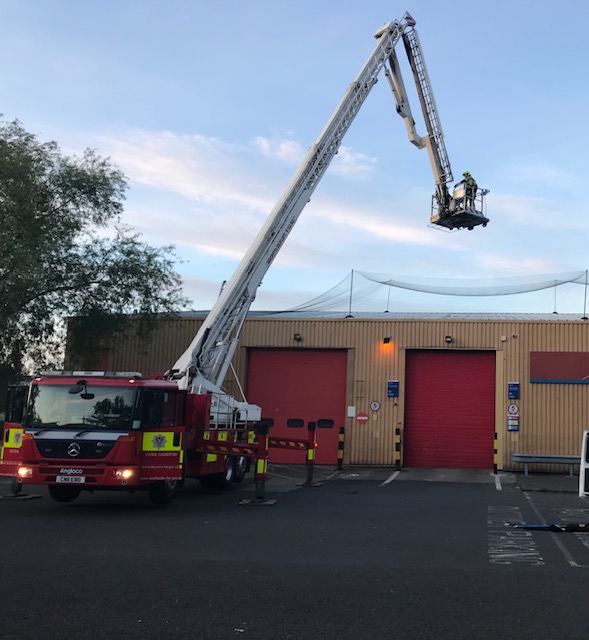 A gull was left completely entangled by netting on the roof of a building at Maesglas Industrial Estate, prompting a joint rescue mission by the RSPCA and South Wales Fire and Rescue Service.

The bird was left “battered and bruised” following the incident at the premises in Greenwich Road and is now recovering at a wildlife hospital.

RSPCA inspector Christine McNeil attended the scene at about 5.30pm on 27 May following a call to the charity. The officer initially tried to reach the gull using a reach and rescue pole, but the bird was too high and the roof was in a fragile state, so she called the fire brigade for assistance.

Blue Watch from Duffryn Fire and Rescue Station used an aerial ladder and were able to get close enough for an officer to lean down and cut the gull – who was completely bound up by the netting – free. The RSPCA inspector removed further netting from the bird on the ground before taking the animal to be checked over by a vet.

Christine said: “We don’t know how long the gull had been struggling to get free but it must have been a very unpleasant experience and one which left the animal a little bit battered and bruised. It’s frustrating that netting like this, which is meant to deter birds, can often end up trapping them – sometimes with fatal consequences – and as ever, we are extremely grateful to South Wales Fire and Rescue Service for their assistance and compassion.”

The gull was monitored overnight before being transferred to Vale Wildlife Hospital and Wildlife Rehabilitation Centre in Gloucestershire by one of the charity’s wildlife casualty volunteers the following day.

Every year hundreds of reports are made to the RSPCA about wild birds trapped in or behind netting, with a large number of these involving bird-deterrent netting. Problems arise when netting is put up incorrectly or becomes damaged, leaving gaps where birds can enter and become trapped, leaving them susceptible to a long and painful death from injury or starvation.

Unfortunately bird-deterrent netting is often fixed in high or hard-to-reach areas, making the rescue of trapped animals difficult and dangerous.

A spokesperson for South Wales Fire and Rescue Service said: “Our crew worked quickly and effectively to safely rescue a seagull trapped in netting on a roof. We will continue to work alongside our partners at the RSPCA to help protect wildlife and keep South Wales safe.

“If you see an animal in distress, please do not attempt to do the rescue yourself. Instead, please contact the RSPCA as their dedicated experts can provide the best advice and will contact us directly if our support is required.”

If you have seen dead birds in netting, or are aware of an area where birds are becoming trapped, please let the RSPCA know by forwarded on the address, property owner (if known) and date of the incident to wildlife@rspca.org.uk. The charity will then write to the owner with advice and guidance about resolving the issue. More information on wild birds and netting can be found on our website.

Live animals entangled in or trapped behind netting should be reported to the RSPCA’s cruelty and advice helpline on 0300 1234 999.

To help us to continue rescuing, rehabilitating and rehoming animals in desperate need of care please visit our website or call our donation line on 0300 123 8181.