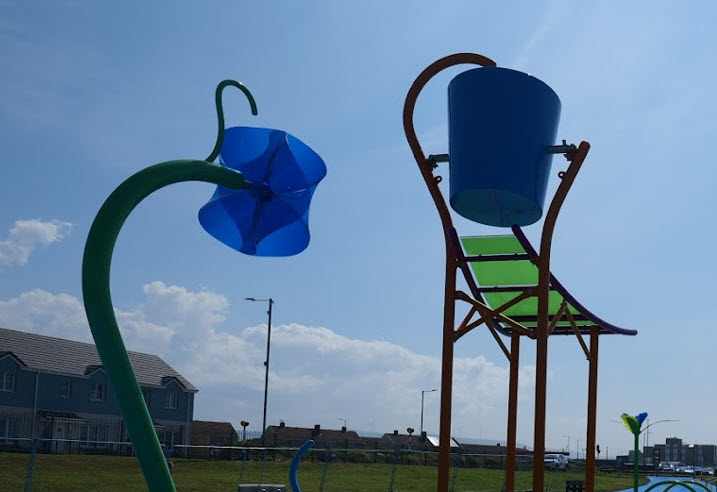 The Herring Gulls established their nest on a large ‘tipping bucket’ feature in the water park and Under the Wildlife and Countryside Act (1981) it meant the nesting pair could not be disturbed until the nest was empty.

Herring Gulls are protected under the act.

Council biodiversity officers who have been monitoring the nest found the birds missing from the site this week and on Friday (June 10th) the nest was cleared from the site.

A damaged egg which had rolled out of the nest was discovered supporting the theory that predation by other gulls may have been responsible for the abandonment of the nest by the parent birds.

Although the mother bird spends most of her time on the nest it must occasionally leave to feed herself and if the nest is in an exposed position it could be vulnerable.

A spokeswoman for the council’s Countryside and Wildlife team said: “Sadly, as the nest was in such an exposed location when she left the nest to get food it would have been in a position to be easily predated by other gulls.

“Normally the nests would be in a corner of a roof or camouflaged amongst pebbles so as not to be visible. But as they chose to make the nest on a brightly coloured platform in the middle of the Aqua Splash – with no camouflage – it would be so easily have been spotted and grabbed by other gulls.

“It was noted there are a lot of other gulls in that area standing on adjacent roofs and lampposts who could easily spot the nest.

“We are sorry this has ended in this way but all was done as stipulated by law to ensure these gulls were left in peace while nesting but it appears the location of their nest was too exposed.”

Celtic Leisure, which runs Aquasplash for the council, has cleaned the bucket and checked it is operational. Celtic Leisure staff have also increased the concentration of chlorine to make sure it is thoroughly disinfected while it runs normally over the weekend.

After more water quality sampling is completed Aquasplash should open to the public in the near future.