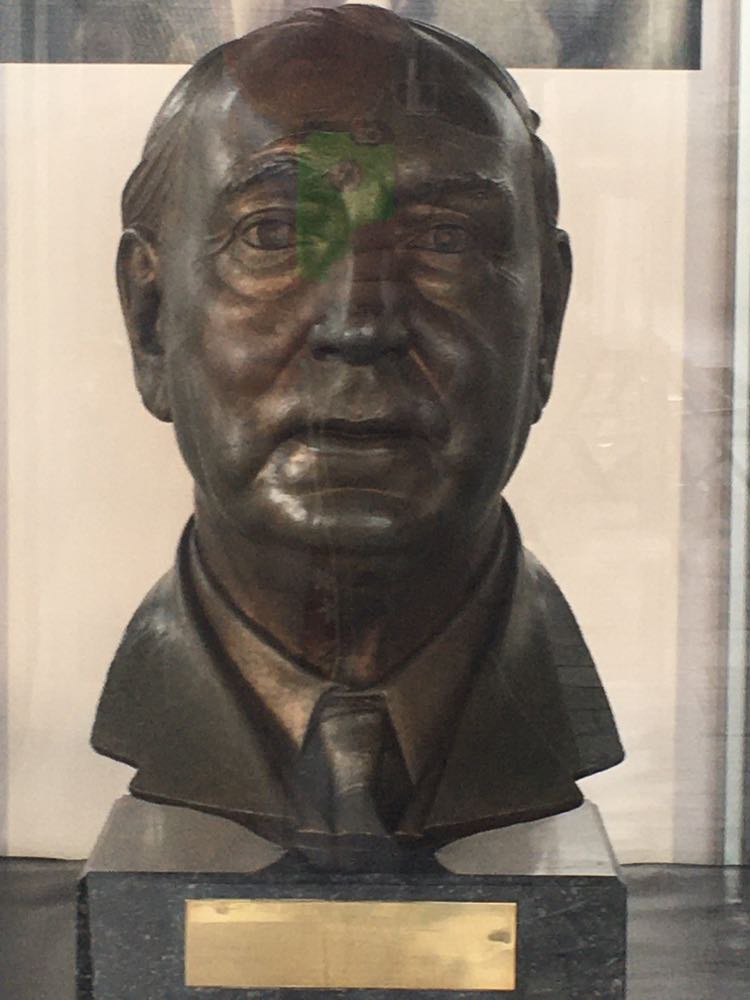 The great and the good of Welsh political life were gathered at the Senedd today, Wednesday (May 11) to honour Jim Griffiths a former MP for Llanelli and architect of the Family Allowance Act. Alun Michael a former Secretary of State for Wales and Simon Hart the present Secretary fof State for Wales were present.

The event was brought about through a collaboration between Llanelli Online, Gwynoro Jones, Carmarthenshire County Council, The National Library of Wales and the Senedd. It followed on from a previous campaign by Llanelli Online and Theo Davies-Lewis titled ‘Cofio Jim’, which involved interviews with Denzil Davies MP, Nia Griffith MP, Dr. John Evans and Gwynoro Jones.

A bronze bust of Jim Griffiths, which had been sitting in the corner of a room at Park Howard Museum in Llanelli was loaned to the Senedd for the special exhibition and event to honour the miner’s son from Betws who rose to great heights in British political life.

A selection of memorabilia including letters to the leader of the then Soviet Union Nikita Khrushchev as well as letters from Prime Minister Harold Wilson and one of Jim’s diaries were brought along by Rob Phillips from the National Archives.

The event was launched by Llywydd of the Senedd  Elin Jones. First to speak was Lord John Morris who gave a concise historical background into the political life of this remarkable man from Betws.

Another of the speakers was D Ben Rees, author of the book on Jim Griffiths titled ‘Jim’. He gave a rousing speech reminiscent of his glory days as a chapel Minister in Liverpool.

Next to speak was the Secretary of State for Wales, Simon Hart MP who mentioned the close working relationship between his office and the Senedd. He also referred to the many portraits of Welsh politicians which decorate the halls of Westminster and listed some of the notable former Welsh Secretaries including one or two from his own Conservative party, John Redwood and William Hague, which raised a chuckle from the audience.

Nia Griffith followed on and spoke about Jim’s political role in Llanelli and about his forward thinking on issues such as equality. Jim Griffiths encouraged his wife to enter politics and also facilitated a platform for suffragettes to speak at meetings.

Gwynoro Jones then took to the podium to speak about the role jim played in establishing devolution, the Welsh Office and the Senedd we have today. Without Jim Griffiths he asked, if devolution had not happened in 1964 when would devolution have happened? He also said that the Senedd had to move forward and that Jim would not have stopped at the establishment of the Senedd. Gwynoro suggested that the future was for Wales was Federalism or even Confederalism.

Closing the event the First Minister of Wales Mark Drakeford said: “We have heard some remarkable things this afternoon. Earlier today I had the opportunity to read an article by Jim Griffiths. The first general election he remembered really well was the general election of 1906. He was 15-years-old. He had been working in the pits already for two years. We have heard today from people who knew who spoke with who can report directly to us on conversations with that man.

“I have been struck sitting here by that progressive thread that links our history in Wales. That remarkable government of 1906. His own contribution to the astonishing government of 1945 the architect of so much of the welfare state. Himself Secretary of state in 1964 and that other great reforming government the Wilson governments of 64 and 1966 and than that unbroken thread to the determination of the Blair Government elected to government for the first time in 17 years that in their very first year they would put devolution on the statute book for Scotland and for Wales. That is an unbroken thread of progressive politics that marks the modern history of Wales and those of us who are lucky enough to work in every day in this building are the inheritors of that great tradition.”

Speaking after the event Nia Griffith MP said: “It was a very fitting event. I am delighted the bust of Jim Griffiths is going to be on display here. He wanted equal rights for women. He really did try to make sure that the mothers had that family allowance. Nowadays we seem to be fighting the same issues. I do think we learn a lot from history. What were the battles they were fighting why were they doing it and that very much inspires us now.”

Lee Waters MS for Llanelli said: “It is about building layers that others add to and Jim laid so many very important layers. As a miner’s leader a neglected part of his history really when he was really at the forefront of standing up for workers across the South Wales coalfields as a great advocate for them and a great leader himself being part of the amazing reforming 1945 government best known for creating the NHS. His key role in creating the welfare state the National Insurance system, the industrial injuries act they were amazing achievements that we benefit from now and just don’t think about but somebody had to fight for them and build them and Jim was one of those people who did it.

“The case for Devolution the case for giving Wales a political persona. First of all the Secretary of State for Wales and building on that our Senedd today which continues to grow in importance and stature. None of that would have happened had it not been for Jim. We neglect him, we talk about Ny (Aneurin Bevan). He is one of ours, he is from Betws and he represented Llanelli for so long. I am very proud of the association with him and it is important through today’s event we retell the story for today’s generations of what a great person he was as part of a movement and that is the important thing. Change happens through movements and Jim was a key part of that.”

Secretary of State for Wales, Simon Hart MP said: “Every day I walk up the stairs at Gwydyr House in Whitehall and I see the picture of Jim. Actually as I look at all the photographs of the 18 former Secretary’s of State what strikes me is what we have in common rather than reason to oppose each other. The best Secretary of States like Jim have always embraced other people’s views before reaching their own conclusions.”