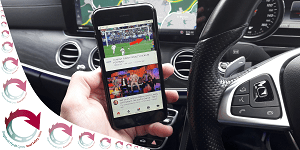 SINCE 2003, when it became a specific offence to use a hand-held mobile phone or similar hand-held device while driving, mobile phones have developed to be capable of doing more than just make phone calls or send text messages.

As most hand-held mobile phones are now able to take photographs and videos, stream music and films, store books and play games, the law has been updated to reflect this.

The amended regulation will cover any device which is capable of interactive communication even if that functionality is not enabled at the time, for example, because mobile data is switched off or the device is in flight mode.

The definition of ‘using’ a phone has been expanded to cover the following:

Since 2017, penalties for using a hand-held mobile phone while driving have doubled, with the offence now carrying a fixed penalty notice of £200 and 6 penalty points. This means that a driver will lose their licence after two offences or where a new driver has held a licence for less than two years, one single offence will lead to the licence being revoked.

Road Safety Wales welcomes this update of the law and recommends that drivers either switch off their mobile at the start of every journey, place it in a signal blocking pouch or put it out of reach in the glove compartment. Using a hands-free system is also likely to distract you from the road. It is far safer not to use any phone when you are driving or riding.

Day or night, irrespective of whether the roads are quiet, driving a vehicle requires full attention. Attempting to use a hand-held mobile phone or similar device while driving, you are putting innocent road users at risk. A slight lapse in concentration can have devastating consequences – please wait until you have safely parked your vehicle before attempting to interact with your phone.