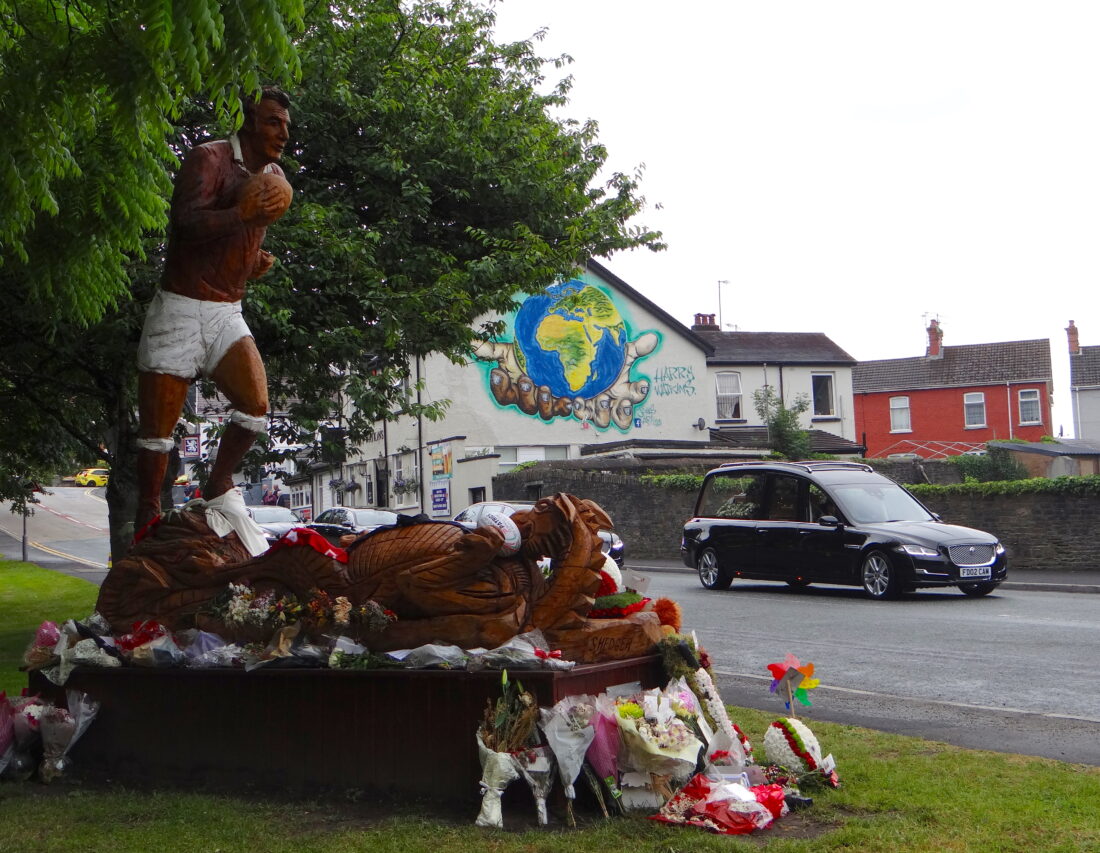 Stop all the clocks, cut off the telephone,
Prevent the dog from barking with a juicy bone,
Silence the pianos and with muffled drum
Bring out the coffin, let the mourners come.

The words of W. H Auden seemed fitting on the morning of the funeral of Phil Bennett, one of World rugby’s greatest players of all time. As the hearse carrying the rugby legend slowly made its way through the village of Felinfoel this morning one could have heard the clocks ticking and almost on cue, a dog did bark and the mourners, they came en masse.

Police motorcycle outriders formed an arrowhead to lead the funeral cortege towards Parc Y Scarlets. Mourners including residents of Felinfoel and a large contingent from Felinfoel RFC stood, heads bowed in silence outside the church as the hearse stopped for a moment almost opposite the statue of the great man himself. Placed within was a beautiful floral arrangement which simply said ‘Dad’.

Family members and others placed wreaths at the statue earlier in the morning and made sure everything looked perfect. Road cleaners were seen picking any item of litter from the kerbsides. Hanging baskets in full bloom hung from lamp posts and yes, the pubs were open. In 1972 the pubs ran dry, today those same pubs, those that are left will be full with people regaling anyone who cared to listen with their own personal memory of Phil.

As the funeral cortege made its way to Parc y Scarlets people at the side of the road removed their hats and bowed their heads in respect for Phil and the family.

The stadium fell silent as Phil was driven for the last time into the the new home of his beloved Scarlets. No sidestep, no dash down the line, no try under the posts and no kick for goal. Those gathered were there to say farewell to a Llanelli great. A faithful servant of the game of rugby and a friend to so many who knew him. Rod Stewart’s ‘Sailing’ played as seagulls soared above as the bearers walked alongside Phil on his last visit to the the rugby field where he once said, he would have loved to have played.

Many of Phil’s team mates including Delme Thomas, Barry Llewellyn and Derek Quinnell were present. As the coffin was carried onto the field Roy Bergiers stepped forward and patted the coffin, a last farewell to a friend and team mate from that great side that beat the All Blacks.

Delme Thomas took to the field and paid tribute to Phil saying that it was a great honour to say a few words about his friend. He said: “I first set eyes on Phil in the late 60’s when he came to Stradey Park. It was great to see so many boys I have not seen for years. What can one say about Phil, I have got to say this; ‘the greatest player I have seen playing the game of rugby’. Phil was something special. People  have come up to me in the last ten days to say they were sorry to hear about his death.”

Delme said that when Barry John retired people thought it was the end of Welsh Rugby but ‘up stepped the boy from Felinfoel and he never looked back’. He said that Phil never forgot where he was brought up. ‘He always mentioned Felinfoel. Who can forget that day in Stradey Park. From that day forward Phil stamped his authority on Welsh rugby’.

He had so much time to talk to anybody. I will remember him as a great gentleman not just as a great rugby player. He was a wonderful boy. I don’t think Phil knew how to say a bad word about anybody. Being here today is a proud moment for me. You can go into any shop and buy anything but you can’t buy respect. Benny I am sorry boy to be standing here in front of you. I refuse to say goodbye. As a Christian I hope we meet again, so God Bless You boy.

Needless to say there were tears and a rapturous applause for Delme as he left the field.

The rousing anthem Yma o Hyd was sung with gusto and following the very dignified and solemn service led by The Rev. Canon D. Huw E. Mosford assisted by Rev. David Jones the funeral cortege travelled back to the Holy Trinity Church in Felinfoel. By now the streets in front of the church were lined with a few hundred people young and old, some in black, some in the familiar colours of Llanelli RFC. Spontaneous applause broke out as the hearse made its way to the church. There was not a seat spare inside but those outside were able to hear the service, which was relayed through a PA system.

As we packed away our camera equipment we caught the sound of one of the pieces of music playing and gently travelling across the village he loved so dearly. It was Annie’s Song by John Denver.