Major objections over detailed plans for 132 homes in Rossett 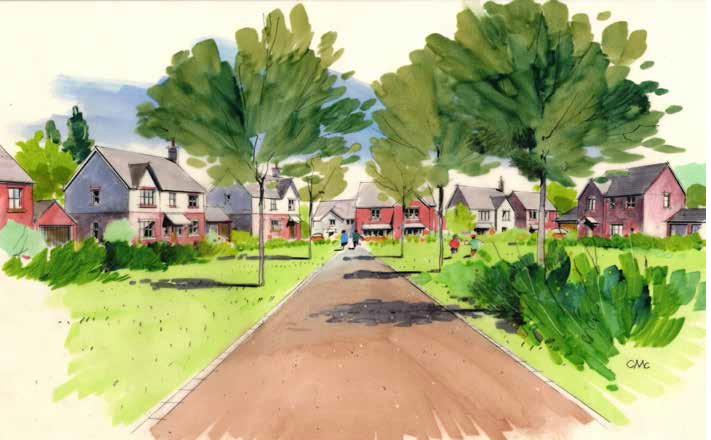 MAJOR objections have been raised ahead of a crunch meeting over detailed plans for 132 new homes in a Wrexham village.

Campaigners in Rossett have been involved in a long-running battle over proposals to develop land to the north and south of Lane Farm.

Permission for the scheme was initially refused by Wrexham Council’s planning committee in January 2019 amid concerns over the loss of green land, the risk of flooding and the impact on pedestrian safety.

However, the decision was overturned the following year after Welsh Government housing minister Julie James said the demand for more homes in Wrexham “significantly” weighed in favour of the plans.

A reserved matters application by Castle Green Homes detailing the appearance, layout and scale of the development is now due to be considered by the planning committee at a meeting on 7 February 7 2022.

More than 170 objections have been received by the local authority ahead of the planning meeting, including from Rossett Community Council.

In their submissions, members reiterated their worries over pedestrian safety and flooding issues.

“This application will change the character of the village, overload public services and result in further traffic congestion, creating more dangers for pedestrians and marginalises historical flooding in the area.

“The suggested footway improvements to the south side of Holt Road have resulted in the Equality Commission advising Wrexham Council that they will be potentially in breach of their duty of care under the Equality Act if built out as it takes no account of the problems of disabled or other protected persons.

“It is more likely to bring such people into an area of accident risk and should be left alone.

“The existing fields already create run-off into the existing adjacent houses and bungalows arising either from surface water or river flooding and will be increased by proposals.”

Local councillor Hugh Jones has also objected to the proposals after highlighting “massive concern” in the village over the scheme.

He said residents felt their fears over road safety had been “completely ignored”.

But the county borough council’s chief planning officer has recommended the application should be approved.

In a report, Lawrence Isted said most of the issues had already been considered and outline permission for the scheme could not be overturned.

“Whilst I am fully aware of the continued and considerable local opposition to the development, as indicated by the number of representations received, the principle of development cannot be revisited.

“The flood consequences assessment proposes measures to mitigate for the risk discussed, including building the properties at the proposed finished floor levels to ensure they remain flood free.

“The location of the vehicular and pedestrian access points to the site were approved at outline planning permission stage and therefore fall entirely outside of the scope of this application.

“The plans submitted with this reserved matters application will ensure an appropriate form of development is undertaken on site in terms of layout, form, open space provision and landscaping.”