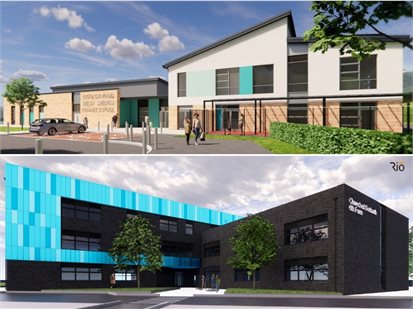 PLANNING permission has been granted for two of Rhondda Cynon Taf Council school developments in Beddau and Rhydyfelin – to deliver brand new facilities as part of a wider £60m investment across Greater Pontypridd.

At a Planning and Development Committee meeting members agreed to approve both projects – to deliver new sixth form and gym facilities at Bryn Celynnog Comprehensive School in Beddau, and to provide a brand new Welsh Medium Primary School on the Heol y Celyn Primary site in Rhydyfelin.

The projects will be jointly delivered by the Council and Welsh Government, via its Sustainable Communities for Learning Programme (formerly 21st Century Schools).

Each development is designed to be Net Zero carbon in operation – which conforms to the Council’s commitments in relation to Climate Change.

The planning permission covers construction of a new gym, a new sixth form block, a realigned grass sports pitch, demolition of four existing buildings, provision of a new car park, and associated works across the site – including landscaping. The development will be delivered during 2023.

The sixth form block would be two and three storeys high, located close to the site’s eastern boundary – on land which currently forms the periphery of the school playing field. It will include designated teaching rooms, social spaces and ancillary provision for catering, plant and storage. The nearby site access from Penycoedcae Road (leading to the athletics track) will be upgraded, while 23 parking spaces and a bike storage area will be built in this area.

The new two-storey gym will be constructed on land at the centre of the site, currently occupied by two of the school’s six tennis courts. Half of the ground floor will be a hall, with the remainder used for changing rooms and storage. The smaller first floor area will house a multi-gym and activity studio.

The wider development will include landscaping to the area behind the Listed building, where a separate existing building will be demolished – to provide an area for students that comprises grassed sections, ornamental planting and several trees. The southern car park will be extended by demolishing a building, with a second access created from Castellau Road to operate the car park as a one-way loop. The eastern car park will also be reconfigured.

In recommending the application for approval, the officer report noted that the development would provide a contemporary, fit-for-purpose sixth form facility, with modern gym/sports facilities to benefit all student groups. It added that landscaping works and the removal of redundant structures would greatly enhance the environment in and around the school, while revisions to parking and bus bays would improve traffic management locally and on the site.

The new building will be on the western part of the site, currently occupied by a grass playing field – while the existing school will be demolished. A total of 16 classrooms will be spread across the ground and first floors (eight on each). The development will include multi-use rooms, shared areas, offices, toilets, changing spaces, a hall, kitchen and storage/plant spaces. The school roof will be overlaid with photovoltaic cells to utilise solar power energy.

The remaining areas of the new school site – occupied in part by the current school buildings – will be redeveloped to provide improved access circulation and parking provision. In total, 41 parking spaces and six coach spaces will be included. The site will be accessed from its north-eastern corner (directly from Holly Street) with a ramped access to the school entrance. The remainder of the site would house a mini-football pitch and MUGA, with landscaping work providing sustainable drainage areas and habitat enhancements.

In recommending the application for approval, the officer report noted that the principle of the development is entirely compliant with planning policy.

“The committee’s decision to grant planning permission for these school investment projects in Beddau and Rhydyfelin represents an important milestone for each – to deliver first-class facilities for our young people that we can be proud of. They are part of a £60m investment across Greater Pontypridd by 2024, which also includes significant proposed investment for schools in Hawthorn and Cilfynydd.

“The project at the current Heol y Celyn site will deliver a stimulating learning environment in a brand new building to replace the current school, which is showing its age. The development will also expand upon and improve the Welsh Medium primary school offer for the area, conforming to the outcomes outlined in the Council’s Welsh in Education Strategic Plan. The Bryn Celynnog development will deliver a state-of-the-art sixth form hub along with new sports facilities for all learners – and I was delighted to visit the school earlier this week to look through the exciting plans with the headteacher.

“Across both developments, officers have placed great focus on – and have thoroughly considered – key issues in relation to road safety and pupil pick-up/drop-off arrangements. These were outlined in respective transportation plans and considered by Members of the Planning and Development Committee on Thursday.

“The Greater Pontypridd projects are just one part of our wider ongoing investment with Welsh Government via the Sustainable Communities for Learning Programme – and I was also able to visit the works site at YGG Aberdâr in Cwmdare this week, to see the progress towards delivery of new facilities later in 2022. This, alongside a separate project at Ysgol Rhydywaun in Penywaun, will increase the Welsh Medium capacity to meet local demand.

“Earlier this month, planning permission was approved for the Mutual Investment Model projects at Penygawsi Primary, Pontyclun Primary and Llanilltud Faerdref Primary, while additional projects utilising £85m additional funding announced in October 2021 are also in development – including £9m proposals for Glyn-coch that were progressed by Cabinet on Monday. This brings the sum of the current ongoing investment in schools across Rhondda Cynon Taf, in partnership with Welsh Government, to £252m.

“Following the granting of planning permission for the schemes in Beddau and Rhydyfelin, I look forward to seeing these very exciting plans progressed in the weeks and months ahead – towards works activity starting on site.”