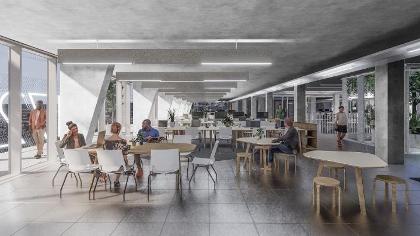 NEW images show how the inside of the major new office development at the former Oceana nightclub site will look once it’s open. The images show features of the building including its reception area, a flexible work space, a breakout area for businesses and an event hall.

Due for completion in the summer of 2023, the five-storey scheme will be carbon zero in operation and worth £32.6 million a year to Swansea’s economy when finished. It will include 114,000 square feet of commercial floor space with flexible co-working and office opportunities for businesses in sectors like tech, digital and the creative industries.

The development – which will provide space for 600 jobs – is part of the Swansea City and Waterfront Digital District project being part-funded by the £1.3 billion Swansea Bay City Deal. It is also supported by the European Regional Development Fund through the Welsh Government.

Traffic management is currently in place on part of The Kingsway to enable the arrival of concrete for the foundation works.

“These new images show what a high-quality, modern and flexible development this will be for the business community, with demand for a scheme of this kind remaining significant in Swansea despite the pandemic having led to more home working in recent times.

“The development will help retain Swansea’s business talent in growing sectors like tech and digital, helping further boost the local economy, create more footfall in the city centre and give businesses the facilities they need to expand, thrive and generate more jobs for local people.”

A roof terrace, a new link between The Kingsway and Oxford Street, public access and balconies overlooking the city centre and Swansea Bay will also feature as part of the development.

“Following on from a major improvement of The Kingsway’s look and feel led by the council, this scheme will complement private sector investment in the area which is either complete or planned to generate even more vitality. Schemes like the Coppergate student development, the planned ‘living building’ led by Hacer Developments and the refurbishment of the Potters Wheel building led by Coastal Housing are a vote of confidence in all the improvement work we’ve carried out.”

Access to businesses nearby will be maintained throughout the construction works. Temporary surfacing has been deliberately laid in front of the development site, with permanent paving to be installed there once main construction work has finished.