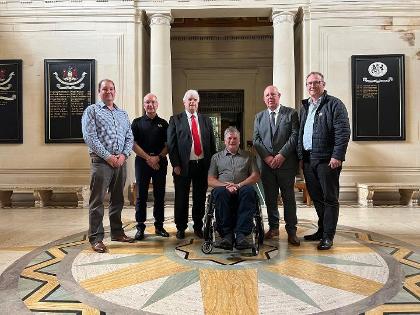 SENIOR representatives from a New Zealand-based company behind proposals to build an outdoor adventure park in Swansea have visited the city to progress their plans.

Proposals for Kilvey Hill put forward by Skyline Enterprises include a cable car system, ziplines and luge runs as part of an attraction aiming to open in 2025.

Design work, land assembly and funding discussions are all on-going which, once finalised, would pave the way for a planning application.

Other proposals for the Kilvey Hill attraction include food and drink offerings, as well as a panoramic platform with views across Swansea Bay.

Swansea Council representatives met the Skyline delegation during their visit to the city, which also included a tour of the new £135m Copr Bay district.

“Post-pandemic, this visit shows how committed the company still is to delivering a world-class, family-friendly leisure attraction for the people of Swansea and South Wales as a whole.

“Making the most of Kilvey Hill’s untapped potential, the scheme would help take our city’s on-going regeneration to the next level, building on schemes like Swansea Arena and the improvements at The Kingsway and Wind Street that we’ve already introduced.

“As well as leisure facilities, the adventure park proposed would also create jobs for local people and further raise Swansea’s profile as a place to invest and do business.”

“We’re hugely impressed with the scale of regeneration that’s taken place in Swansea since our last visit to the city before the pandemic.

“We can see that something special is happening in Swansea and, as a company, we’d very much like to be part of it.

“The positive meeting with Swansea Council means our discussions are now continuing at pace as we look to complete our due diligence and take our proposals to the next stage of their development.”