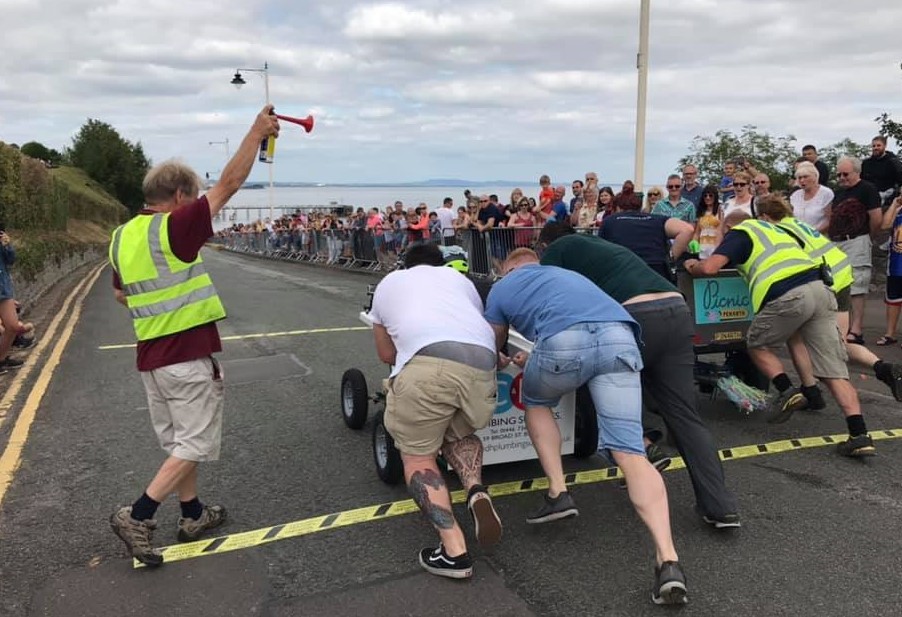 A COUNCILLOR and founding member of a popular soapbox race in Penarth has opened up on its highly anticipated return after two years.

The Penarth Downhill Derby, which started in 2010 will be returning to Penarth on Saturday July 16 after two years of it not being held due to the Covid 19 pandemic.

“In April or May we said this is not going to happen and it was really quite deflating,” said Elliot, who is also one of the founding members of the event which sees people put their DIY skills to the test.

Wacky Racers-themed carts, a mock up DeLorean and a giant wedge of cheese on wheels are just some examples of the homemade vehicles that can be seen racing down Cliff Hill on the day of the event.

It has been a particularly difficult couple of years for Elliot, whose mother passed away during the time of the pandemic.

He said: “I didn’t think about [the race] much in 2021, but as soon as 2022 came around the enthusiasm and the juices started flowing to get it going again.

“I have missed it. There has been lots to get in the way of the enthusiasm for it, but I am really looking forward to it returning.”

Elliot tried to set up a go cart race in 2009, but it wasn’t until his friend, Jerry Cross, and Jerry’s son, Jamie, came to him with the idea of another race in 2010 that conversations started on developing the Downhill Derby

The idea, Elliot said, was to bring the community together.

He said: “Our first thought was to get people off their Playstations and to get them out doing something that mums and dads and all the family could get involved with.”

When asked what he is expecting from this year’s event, Elliot – also a former member of Llandough Community Council – said this year’s race could be the biggest yet.

“People are wanting to do things, so I think there is going to be a good crowd. And we always get a few who turn up and haven’t registered or turn up under the radar, so we could have up to 35 racers, which would be a record for us.

“It is always the ones who don’t register and turn up on the day which are the most interesting.”

Elliot has raced most years since the event’s foundation – even rolling his cart one year – however, he said he will not be taking part this time.

He said: “We would get everything set up and then I would join in with the race, but as it has grown and as there has been more to do it is not possible.

“I hope one day that I can step back and race because I do really enjoy it.

“That kind of silliness, I love stupidity like that. I think people take themselves too seriously.”

On the face of it, it might be fair to say that the “brilliantly weird” race comes with its risks. However, there are safety checks and advice as Elliot pointed out.

Everyone is required to wear a helmet and should wear a long sleeved top and long trousers. Gloves are also advisable.

No glass or sharp points are allowed on vehicles and a braking mechanism, which is checked before the race, is required.

This year’s event will have more significance with it being the first one since the beginning of the Covid-19 pandemic, but it still has the aim of bringing the community together for a collective escape from reality, according to Elliot.

“I will be a bit sad because up until 2019 my mum had been to every single one. I would always make sure I would get a chair in a good spot for her towards the last couple of years.

“I would bring my whole family. My dad and my sister would do the timing. Alex, my sister’s husband, would help with the timing. I like that it’s my family involved and I know that lots of other families are involved.

“It has become an intergenerational thing as well and that’s really nice.

“Over the years it has grown and grown. We have tried things, we have changed things and it has grown organically.

“Again the support in Penarth I think has grown organically, which is really nice because I think it is the highlight of the carnival now, which makes me quite pleased.

“It really makes me chuffed that this little thing we started is loved by Penarth people.”

It is not too late to join in and have a go at making your own cart either.

“As long as it has got good breaks, anything goes,” said Elliot.

On style advice, Elliot said that “everything and anything” is welcome. He added: “I hope some carts turn up that leave me open-mouthed.”