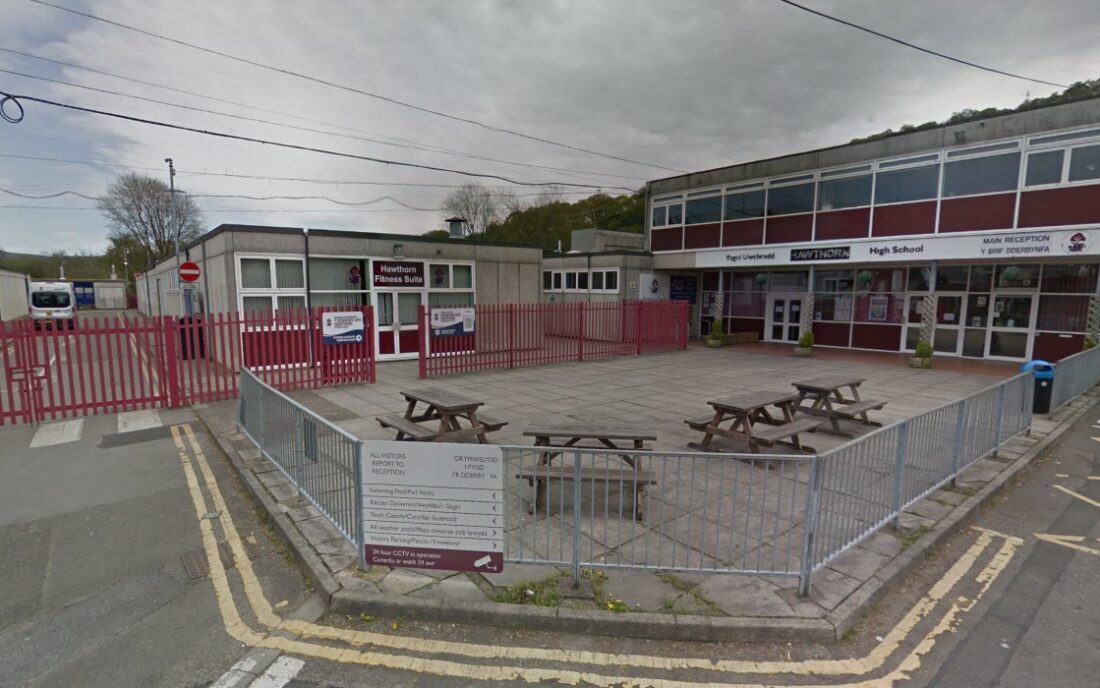 PLANS for a new 3-16 super school near Pontypridd have been approved by councillors despite transport and highway safety concerns being raised.

Rhondda Cynon Taf Council’s plans for the new school on the site of Hawthorn High School were given the go ahead by the council’s planning committee on Thursday, July 7 with an additional condition related to the boundary treatment.

It involves the demolition of some buildings on site and their replacement, the refurbishment of other buildings and a new staff car park, coach park and pupil drop off area.

The new school is part of a wider £60m scheme to revamp education in Pontypridd and would welcome current English medium pupils from Hawthorn High, Hawthorn Primary and Heol y Celyn Primary in 2024.

Two new multi-use games areas (MUGAs) will be provided and access will be from from School Lane as it is now but with some reconfiguration, the report said.

There will be 35 visitor parking, pick up and drop off spaces, 17 community parking spaces and 84 spaces for staff parking.

Carl Thomas, a councillor on Pontypridd Town Council, chair of governors at Hawthorn Primary School and a local authority governor at Hawthorn High School spoke in favour of the application.

He said: “I wholeheartedly endorse and support this application for the provision of a new 3-16 in Hawthorn.”

He said the existing buildings are past their prime and whilst their have been improvements he said it is very welcome to see the investment from RCT to bring the school into the 21st Century which he said is by and large out of sight of neighbouring properties.

He said while it’s inevitable that there will be some disruption during construction, he said “this is something that is unfortunately necessary but only a temporary inconvenience” and said it should not be a reason to prevent the improvement of the educational facilities.

He recognised the concerns over highways and access and parking provision and said increased provision is being made, but did acknowledge there will be parents and guardians who park on surrounding roads.

He said: “It’s frustrating, it’s annoying but it is no reason to prevent the 3-16 school application.”

He said local children deserve to be taught in a modern, fit for purpose setting and that there should be no further delays.

But there have been 15 submissions objecting to the proposals with many focusing on highway safety and transport concerns.

Councillor Cathy Lisles, who represents Hawthorn and Lower Rhydfelen on RCT Council, spoke about some of the concerns with the application particularly around highways and transport issues.

She said: “I welcome the extra screening next to Hawthorn Villas. I also suggested that the road to the car park be moved over slightly.

“This has been slightly mis-interpreted by the planning officer as a request to re-draw that whole section of the design.

“If part of the road could be moved further away from the rear boundary of the Villas, it would also enable additional plant based screening to be added between them and the road. Could this be looked at please?

“The Hawthorn redevelopment is part of the 21st Century Schools plan for Pontypridd. It was stated that the Traffic Impact Assessment was a key element of the process.

“I quote ‘This assessment will look at the current capacity of the highway and also assess the impact of any increase in traffic flow…will contain recommendations in relation to improving the existing highway infrastructure as well as incorporating pedestrian safety measures such as traffic calming etc.’

“The planning officer’s response is that the planning application has to be determined on its planning merit alone and this comment cannot be taken into consideration which is disappointing given that that was the comment made by the officers of RCT at the time that the objections were put together.

“Whilst a transport assessment has been completed for this development this did not, as was done for other school 21st Century school developments, include a car parking stress survey.

“Quoting from the PAC response ‘The content of the traffic surveys and Transport Assessment was scoped with the Local Highway Authority and deemed appropriate in this instance.’ This means that there is no pre development baseline data available with which to compare the situation post development.

“However, the planning officer notes ‘It is clear that the greatest weight of objection to the proposed development relate to access and highway safety issues.’

“Local residents and myself, have listed the current ongoing unpleasant issues at pick up and drop off which include congestion, parking on pavements and across driveways. It is these issues which this planned redevelopment has as yet failed to address.

“The safer routes to school assessment, which should have formed part of this planning application and therefore subject to consultation with the local community and myself, has yet to be completed and is subject to a condition.

“Local residents are relying on this to address the current issues being experienced. I give one example. Whilst the overall size of the new all-through school is decreasing, the nature of the school, in contrary to the view of the planning officer will change, as there will be a marked increase in the numbers of primary age children attending the school.

“With a more than doubling of the size of the primary school element of the school, the number of children and parents trying to walk through the pinch point on the pavement outside of the dentists by the pedestrian crossing will likewise double.

“Therefore, whilst the safe routes to school assessment will naturally be scrutinised by the planning authority as part of the condition, in the interests of openness and transparency, local residents and myself should also have the opportunity to read and comment on the draft so that we can ensure that the local issues that have been repeatedly listed in our responses are, finally addressed. Can this be added to the condition please?

“My final request for change is in relation to the drop off car park. The supplementary planning guidance states ‘the parking area should include a facility for vehicles to turn without reversing.”

“The drop off car park, contrary to other recent re-developments in the area does allow for reversing. Safety issues in drop off zones, including those caused by reversing have been widely reported in the media in relation to three schools in Bridgend.

“Reversing is dangerous, otherwise the supplementary planning guidance would not advise against it. Although raised as by myself and others as an issue in the pre-application process, it was not responded to at all, as it should have been by the developers in their PAC report.

“The developers, highways, and the planning department have as yet failed to demonstrate why they feel that a drop off car park which involves reversing is deemed acceptable and why the safety of our children should be put at risk and why the guidance of the supplementary planning guidance should not be followed.

Planning officers recommended approval for the application. Committee member and councillor for Upper Rhydfelen and Glyn-taf Loretta Tomkinson said she was in favour of the application.

“children deserve a school which is fit for purpose, they deserve an education where they have a choice to choose their learning pathways, where pupils can transition very simply from primary to high school, excellent teaching staff helping them raising standards, success and achievement that will ready them for the next stage of their life whether this is higher education or employment.”

Councillor Gareth Hughes said he completely understands some of the concerns raised by Cllr Lisles saying he has a 3-16 school in his ward which was one of the first in RCT – adding that he’s pleased to see that the education department has learned from that as there aren’t any drop off points there.

“Whilst I think the concerns are valid, I’m content with what the officers have said and the plans facilitate safe drop off and pick up for the children.”

He said schools in the centre of a community will undoubtedly create congestion at drop off and pick up times and he doesn’t see any way around that.

He said children deserve 21st Century facilities to be taught in and Councillor Craig Middle said this can only be an enhancement for the safety of children and the development is well welcomed.