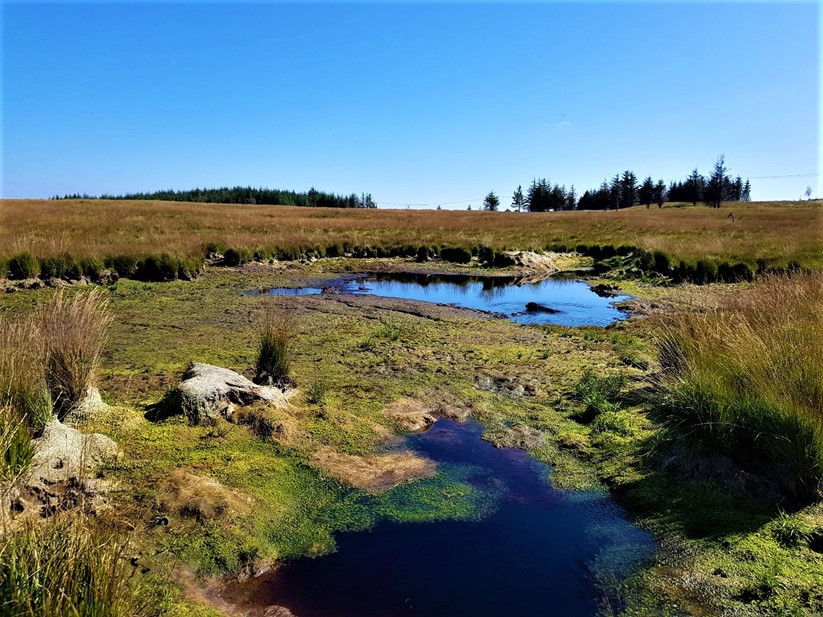 FOLLOWING extensive work during the past winter months, the National Lottery funded Lost Peatlands of South Wales Project is happy to announce that 23 hectares of bog habitat has now been restored within the project area.

The upland landscape between Neath Port Talbot and Rhondda Cynon Taf has a wealth of natural assets which, if managed carefully, can have a big impact on human-induced climate change while also reversing biodiversity decline by protecting these globally rare habitats.

Peatland management is one of the crucial tools in the world’s approach to achieving its carbon goals – and for good reason. They are among the most carbon-rich ecosystems on Earth, storing around 25% of total soil carbon while only occupying 3% of the global land area.

Peatlands in good condition act as a carbon sink – locking in vast amounts of carbon formed over millennia – and they can also reduce flood risk, improve water quality, support biodiversity and have a net cooling effect on climate.

However, when peatlands are damaged, they become a significant carbon emitter. It’s therefore vital to assess the peatlands we have and determine how best to restore them. This is typically done by focusing on the hydrology of an area, and through restoration works the ‘re-wetting’ of peatlands will allow their return to a near natural state.

Commercial forestry dominates this landscape following planting in the 1950s in line with calls for UK grown timber – post Second World War. To achieve this, areas of peatland were drained through channels ploughed into the landscape, and as a result the water level has since dropped, leaving these habitats exposed and degraded. This dried peat is either lost to the atmosphere or washed downstream, and along with it goes vast amounts of organic carbon formed over millennia.

To restore these bog systems all that needs to be done is to ‘re-wet’ them by bringing the water level back to the surface. Once back to a near natural state, carbon will be locked in and the remarkable species that is Sphagnum moss can once again spread and continue to create these unique wetlands.

There are many ways to re-wet and restore bog systems or ‘mires’, with most techniques simply blocking drainage channels or areas of surface run-off. This can be done by physically putting in dams made of wood or metal/plastic piling, or preferably re-working the land to form dams or bunds made of peat itself.

For the first project site up for restoration – Castell Nos Habitat Restoration Area – a series of small peat dams have been ‘keyed’ into the existing drainage channels. This is already holding back water thus raising the water table. Cross tracking – where an excavator drives over the peatland – is also a technique used here to generally flatten the landscape, reducing drainage and creating good conditions for Sphagnum moss.

This site is classed as a trial example for restoring previously afforested peatlands. To analyse the work, project ecologists, Swansea University and volunteers will be monitoring the site for aspects such as ground water levels, water quality and vegetation composition.

“Once data is collected on this project it will help fill in the evidence gaps in scientific literature regarding restoration in this scenario and that will be a key project outcome – informing best practise for future peatland work – both in Wales and beyond.”

“We’re proud to deliver restoration on Castell Nos this year as part of the Lost Peatlands Project. The previously afforested land has served us well in its purpose as a managed forest which also provided a service to carbon sequestration, water management, cooling, and as habitat for local biodiversity.”