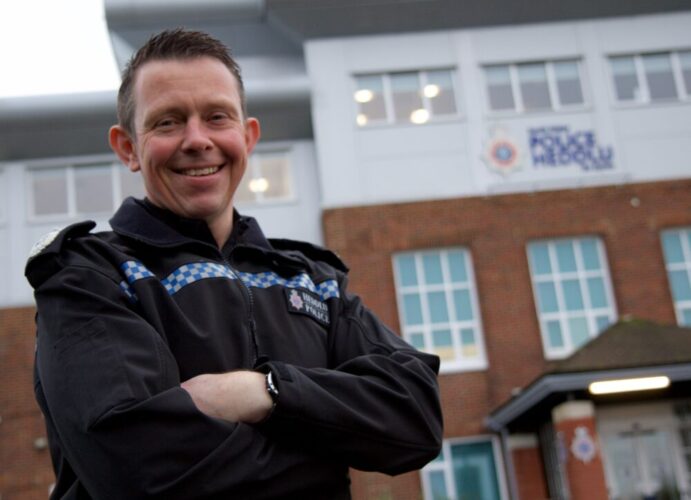 A REPORT into the shocking Mayhill riot of May, 2021, has criticised the response of South Wales Police, which refused two requests for a public order unit to be deployed and left cowering residents “unprotected”.

An independent review said residents whose windows were smashed and whose cars were torched and sent rolling down Waun Wen Road showed clear distress in recalling their experiences.

It said there were “significant failings”, and called for a full investigation and that all the available evidence, information and material was needed.

But it also said that any assessment of events on the evening of May 20 last year must start with a recognition that criminal responsibility sits with the adults and young people who committed criminal offences.

The review said there was “a protracted period during which the residents of Waun Wen Road were in danger, at risk and unprotected by the police”.

It said one specific example was when a threat to life was identified in respect of a particularly vulnerable individual which resulted in the deployment of officers with shields.

The officers later withdrew and the withdrawal, while “maximising the safety of officers”, needed further examination.

The review said: “Indeed this victim, along with other victims of the incident, appear to have been ‘lost’ for some time in both the decision-making and response processes.”

It said the presence of a large number of officers – many visible to the public outside Townhill police station and others standing within sight of the incident itself – should be tested against force-wide deployment and command structures.

The review panel said the information it received was that 20 or so officers responded early on, to 60 plus by the early hours of May 21.

It said footage of police deployment showed a number of other police vehicles could be seen in the area.

“It is not entirely clear what happened to other deployed officers, such as the taser officers and police dog handlers.”

The review said officers requested the support of a police public order unit but that it was declined twice.

The senior officer at the scene in Mayhill sought to go outside of the chain of command because of its repeated refusal.

The review said the public order unit available from Gwent was not authorised to proceed into the South Wales force area until after the incident had, in effect, ended.

“There was evident raw emotion and distress in the re-living of experiences of that night and its aftermath,” it said.

“Some of the views shared with us include the following: “the police let us down”, “they didn’t protect us,” “they failed to protect us”, “they weren’t there for us when we needed them,” and “we don’t understand why they didn’t do anything”.

The review found the command structure needed further examination and clarification so as to identify the communication issues that appear to have arisen during the timeline of the incident.

“We have been unable to identify a clear command structure either properly identified or working in practice,” it said.

“Whilst we have been told that there were other incidents occurring elsewhere in the force area we have not been provided with evidence based reassurance that these other events justified the lack of apparent Senior Command and/or Central Police focus on Mayhill’s needs.”

It said the riot should have been categorised as “critical” sooner than it was.
“It is clear that there is a significant job of work for the police to do in seeking to re-establish trust and confidence in the aftermath of this incident. Doing so must be predicated on a full, open and transparent understanding of what went wrong that night.”

The review also looked at the involvement of Swansea Council.

It said a barrier had been requested on Waun Wen Road in the weeks leading up to the incident.

“It is unfortunate that the work had not been carried out,” it said.

It was an event which thrust Swansea into the national media spotlight.

On May 20 last year, crowds which had gathered for a vigil for a 19-year-old erupted.

Cars were sent down the steep hill on Waun Wen Road.

Residents hid inside their homes as windows were smashed. Police who had attended the disorder came under attack and left.

How had this happened? Why had it got so out of control? And why had police been able to quell it?

A number of arrests were made in the following weeks.

Two months later it was announced that a panel chaired by a leading barrister would carry out an internal review. QC and professor, Elwen Evans, was joined by police expert Martin Jones and local Government expert Jack Straw.

Speaking at the time, council leader Rob Stewart described the scenes on May 20 as shocking but rare.

“However, it’s essential that we take the opportunity to answer the questions the community have asked and learn more about the background to this incident, what happened on the night and the immediate aftermath,” he said.

Alun Michael, the force’s police and crime commissioner, said: “The review will examine what led up to that incident, whether it could have been predicted and the way in which agencies responded to support the local community and restore confidence after the event.”

The family of the 19-year-old, Ethan Powell, said they were horrified by the scenes after an event to mark his death a couple of days previously.

Ethan collapsed hours after watching Swansea City’s play-off match against Barnsley on television on May 17.

A relative told Wales Online: “Ethan was a down-to-earth, well mannered boy, who would do anything for anyone.

“He had gone to watch the football with his grandfather in Llansamlet on Monday, and he gave my nan a hug before he left.

“He was dropped at home in SA1 which was where he collapsed.

“There were no untoward signs that anything was wrong with him, which is why it is such a shock.

“He would have been heartbroken to have seen what happened.

“We can’t understand why there were people there laughing.

“To see that going on in Ethan’s name is devastating.”

An inquest was opened into his death in October, where it was confirmed it was not being treated as suspicious.

The results of a post-mortem suggested it was drug-related. The inquest was adjourned, pending a full hearing.