Report launched on case for £500m Llantrisant to Cardiff Metro 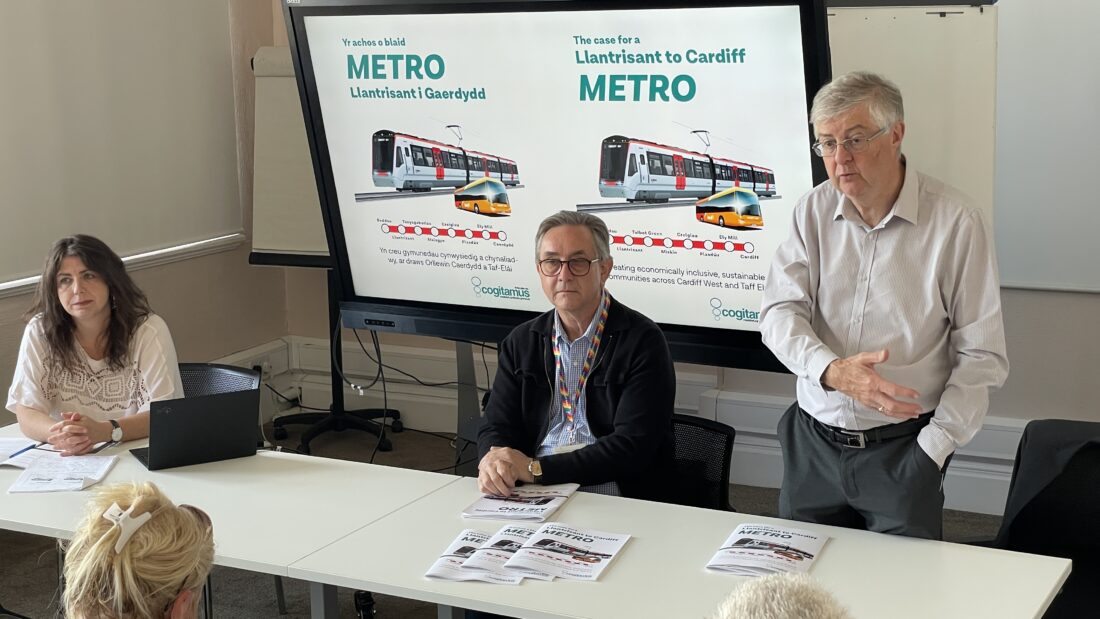 A PROPOSED new metro line that would run between Llantrisant and Cardiff could cost more than £500m, it has been revealed.

The report launched titled ‘The Case for a Llantrisant to Cardiff Metro’, revealed some long and short-term visions of the proposal.

If it goes ahead, the line would be part of the wider South Wales Metro project.

Increased frequency of trains on lines between Cardiff Central and Radyr and Cardiff and Pontyclun, and a new ‘parkway’ station on J34 of the M4 were all mentioned as ‘short-term wins’ that could be achieved by 2026.

Longer-term solutions included remodelling of the track and signalling, and the addition of tram-trains.The work needed to make the short-term improvements and long-term vision a reality would require funding from the UK Government, according to the report.

Policy director at Cogitamus, Katie Allister, who presented the report at its launch at the Pierhead building at Cardiff Bay, said:

“The full implementation of a tram-train is an expensive project. It does come in at around £500m-plus because of the significant work at Cardiff West that I have said.”

The re-modelling of the track and signalling would allow for the removal of the bottleneck at Cardiff West junction.

The report said this would provide more than four trains per hour on the City line and allow tram-trains to operate.

“But, there is some technical work that can be done at Cardiff West imminently over the next few years, which will allow the frequencies that we were talking about on the City Line to be raised from two to four trains per hour and you are looking at a £20m to £30m price tag for that.

“Hugely different, yes, but they are each necessary stepping stones. You need that first bit of work at Cardiff West to allow that more strategic long-term solution to be delivered.”

Mr Drakeford said affordable and reliable transport that could be provided by this project is needed in the area to meet the needs of a rapidly growing population.

“Cardiff needs more housing. We have horribly large numbers of people on the housing waiting list,” he said.

“When you provide houses for people then you have to provide all the other things that go alongside that and transport is one of the key things that we need in order to make sure that the things that make Cardiff an attractive city can go on being attractive to people.

“And being able to move easily around the city from where you live to where you work, to where you will spend your leisure time and so on is fundamental in making that growth in housing an asset to the city rather than something that becomes an impediment.”

“This is something that has been going on for a number of years. There has been co-operation between Cardiff Council, Rhondda Cynon Taff Council and the Welsh Government.”

He added the purpose of the launch of the report was about “boosting that argument” to make sure that the possibility of a Metro between Llantrisant and Cardiff remains “on the radar”.

A number of disused railway lines have already been identified for potential future development as part of a tram-train line.

The old Llantrisant branch line is one of these that has been protected and could be brought back to life to minimise construction costs and disruption if a Llantrisant to Cardiff line was to go ahead.

Speaking after the launch of the report, Cardiff Council Cabinet Member for Transport and Strategic Planning, Councillor Daniel De’Ath, said:

“The Metro is the future of transport in Cardiff and in the region. Transport needs to be accessible.

“It has to work around peoples’ lives and that is a vision we have at the council along with the Welsh Government. Projects like this deserve to be funded by Westminster.”