Report of Citizens’ Assembly on Democracy in UK published 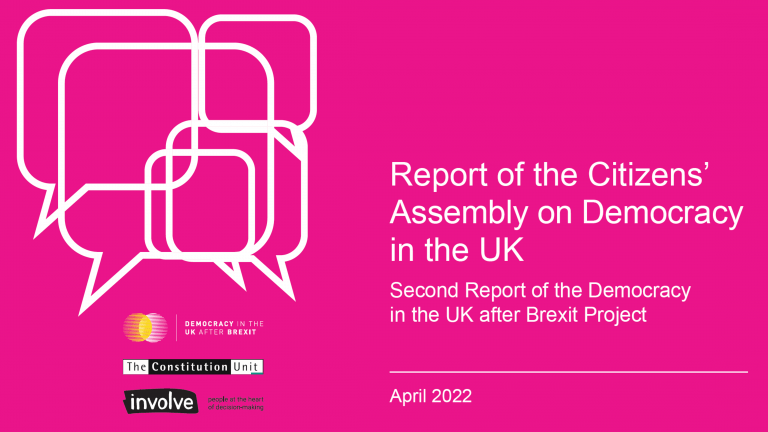 The Assembly comprised 67 members of the UK public, who were carefully recruited to be representative of the UK voting-age population. Over six online weekends together, members considered in detail the question, ‘How should democracy in the UK work?’. They focused on three fundamental aspects of democracy: the relationship between government and parliament; the roles of the public; and ways of upholding rules and standards.

The report contains members’ conclusions, in their own words. It has three core findings:

First, members expect high ethical standards of honesty and selflessness from their elected representatives, and support a stronger role for regulators in order to achieve this;

Second, they do not want power to be concentrated too far within the executive, advocating spreading it out to parliament and the courts; and

Third, they want better mechanisms for the voice of the public to be heard, with focus on existing ways of engaging with the representative system, and on the roles of petitions, referendums, and deliberative processes.

In total, members produced 8 overarching resolutions and 51 specific recommendations. They also developed 16 core principles that they felt should underpin a good democracy in the UK, and 20 statements summing up their feelings about how democracy is currently working. All of these are set out in the report.

“The Citizens’ Assembly on Democracy in the UK shows that people across the UK are deeply concerned about the state of our democracy. That’s not just a flash-in-the-pan response to Partygate. Even before the scandal grew, people wanted politicians who are honest and trustworthy, and an enhanced role for independent regulators. They oppose moves to side-line parliament or weaken the courts. And they want the system to be more responsive to considered public opinion.

“Assembly members have set out a programme of reforms that could help restore trust and enable healthier politics. It now lies with policymakers up and down the land to take these recommendations further.”

Kaela Scott, Design and Facilitation Lead for the Citizens’ Assembly on Democracy in the UK and Direction of Innovation and Practice at Involve, said:

“The recommendations from the Citizens’ Assembly show that when members of the public are given the opportunity to come together and learn about the complexities of our democratic system, and the time to really discuss and deliberate on the system and what they want from it, they can, despite their diversity, reach high levels of agreement. Their wide-ranging recommendations are informed by the evidence they heard, are internally consistent, and give a clear indication of where they believe change is needed to create a better democracy for everyone.”

The Citizens’ Assembly on Democracy in the UK forms part of a wider research project. Called Democracy in the UK after Brexit, The project is funded by the Economic and Social Research Council (ESRC) as part of its Governance after Brexit research programme. This report will be followed by a further population survey and a final report summarising the project’s findings.