Report published on causes of Trehafod flooding during Storm Dennis 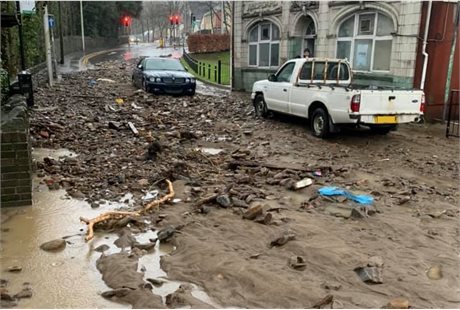 RHONDDA Cynon Taf Council has published its latest Section 19 report under the Flood and Water Management Act 2010 following Storm Dennis (February 15 -16, 2020) . It is the twelfth report following the storm event, and focuses on the causes of flooding in Trehafod.

The rain storm caused flooding to at least 68 properties and significant road flooding.

The report concludes that a culvert inlet, above the railway line, was the main source of the flooding; that a localized landslip had contributed to the failure of the culvert to manage the flow of water and that Storm Dennis was an extreme event that made iy unlikely flooding could have been prevented.

Since the New Year, the Council has published reports relating to Taffs Well, Glyntaff, Treforest, Pontypridd, Nantgarw, Hirwaun, Treorchy and most-recently (on March 24, 2022) Ynyshir. These have followed previous reports for Pentre (July 2021), Cilfynydd (September 2021), Treherbert (November 2021), and an Overview Report for all of Rhondda Cynon Taf (July 2021).

The report is available to view in full on the Council’s website.

Today’s publication identifies a surcharging culvert inlet, located above the railway line at the north-eastern boundary of the investigation area, as the primary source of flooding in Trehafod. A reported localised landslip is also considered to have contributed debris towards the culvert inlet and network – reducing its hydraulic capacity to manage the flow of water. The culvert inlet surcharged over the railway, onto the A4058 and towards Trehafod Road.

Intense rainfall and localised surface water accumulation are also considered to have exacerbated the flooding in Trehafod – especially in those areas identified as high risk of surface water flooding in NRW’s flood risk mapping.

As the Lead Local Flood Authority, Land Drainage Authority and Highway Authority, the Council is the RMA responsible for managing the ordinary watercourse and the surface water flooding that occurred during Storm Dennis. In response to the flooding experienced in Trehafod, the Council has completed a total of 11 actions and has proposed to undertake a further six.

Completed actions include survey work, jetting and cleansing to local highway infrastructure, while the Council has led on the development of a Control Room to complement its CCTV Centre and Contact Centre during future flood events. It has also initiated an interim Property Flood Resistance project offering expandable flood gates to those properties deemed at high risk, and is working closely with the Highway Authority and DCWW to evaluate surface water management options to alleviate the future flood risk to properties.

The report concludes that Storm Dennis was an extreme event, and it is unlikely that flooding could be prevented entirely in a similar event. It adds that RMAs satisfactorily carried out their functions in response to the flooding.

“Following each significant flooding event, the Council as the Lead Flood Authority must publish a Section 19 report – a factual document outlining what happened based on the evidence collected. Each one is fully-accessible and published on the Council’s website – identifying Risk Management Authorities, their actions since the event, and what actions they will carry out in the future.

“Today’s publication focuses on the causes of flooding in the community of Trehafod, which is the twelfth report to be published following Storm Dennis. Officers continue to work towards publishing 19 reports in total. The report concludes that all RMAs undertook their responsibilities in a satisfactory way, and have put forward further measures to improve future preparedness.”