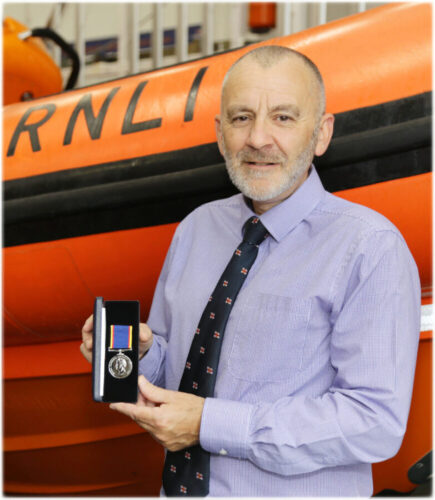 PAUL EASTMENT of Porthcawl was recently awarded a long service medal for over twenty years of service to the RNLI. Paul first joined Porthcawl lifeboat crew in late 1997, then in 2002 he held dual roles both as a volunteer crew and a RNLI staff member.

Paul, who is married with one daughter and whose father also served as a volunteer crew member at Porthcawl has been a valuable member of staff who has supported many crew and their stations. As Trainer/Assessor for Wales and Isle of Man from 2002 to 2015 his time would be spent on the coast and at RNLI College in Poole. He would train or assess volunteers to ensure they could operate safely whatever their role, be it crew member, navigator or coxswain of all the various types of ‘all weather’ or ’inshore’ lifeboats.

More recently as Area Lifesaving Manager he took responsibility for the management of lifeboat stations from Penarth to The Mumbles and the Lifeguard service for Bridgend and the Vale of Glamorgan councils. On appointment to his latest role in 2015 Paul resigned from Porthcawl crew to avoid any conflict with his management role.

The highlight of his time as a crew member is undoubtedly being awarded the RNLI Bronze Medal for Gallantry. Paul said, ‘I was serving as a Flood Rescue Command Member when our team were sent to the West Country floods in 2012. The award was presented to my team in recognition of a rescue in Umberleigh in Devon of a lady that had been washed from her car into a swollen river’.