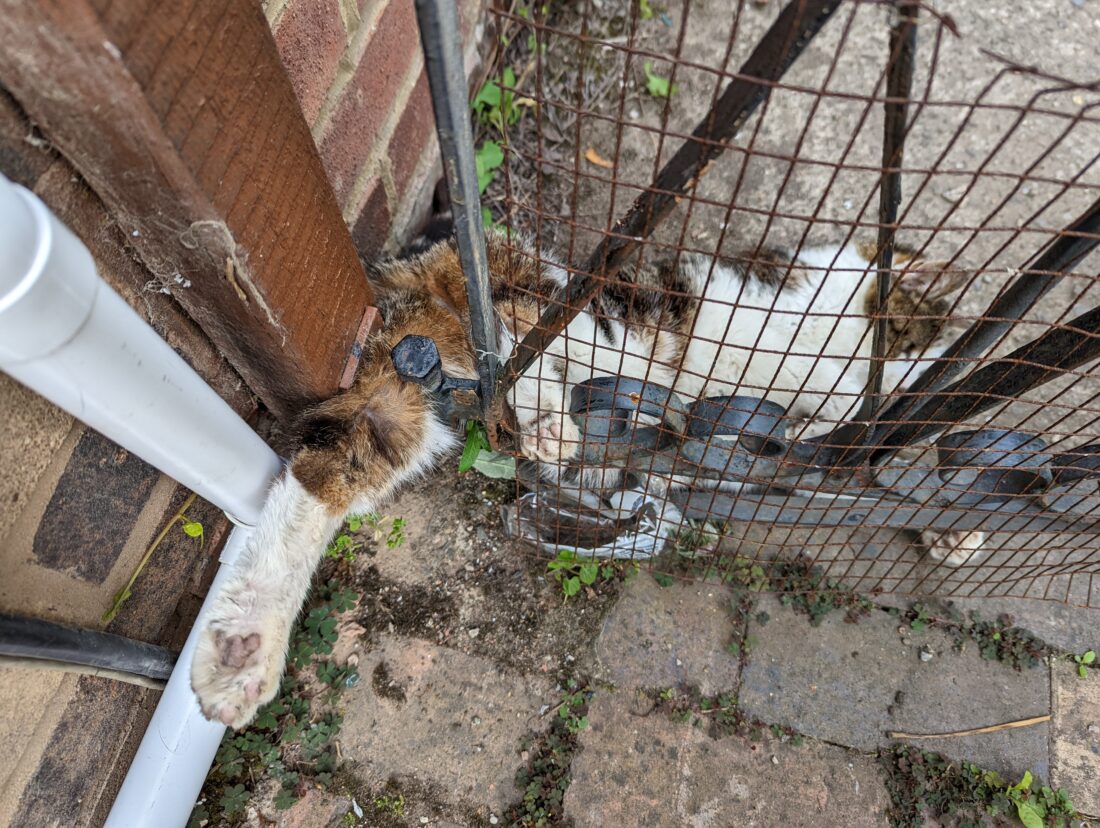 A cat who had trapped his back leg in a gate in Wrexham has been rescued by RSPCA Cymru.

The eldery tabby and white cat was found in a lethargic state yesterday (Tuesday 26 July) on Oxford Street, with a member of the public contacting the RSPCA after they were unable to release his leg – which was caught between the hinge and the gate.

RSPCA animal rescue officer Melanie Froude attended and was able to safely wriggle his leg out and took him to a vet for a check up. “He was very lethargic and was laying down when I first saw him,” said Melanie.

“Luckily it was confirmed at the vets his leg was not broken but he does have an injury there as he is not standing on it properly.

“He is very skinny and his teeth are in bad shape which may explain his skinniness, and his front left leg is swollen.”

This rescue comes as the RSPCA have launched a fund-raising campaign called Cancel Out Cruelty [1] which calls on the public to support the charity so frontline staff can save more animals in distress. Unfortunately the cat – who has been nicknamed Freddie – isn’t microchipped so an owner has not been so far located despite initial
enquiries.

“Poor Freddie is very old,” said Melanie. “The vet thinks he could be around 14 to 15 years old and isn’t in the best shape so may be a stray.

“But he is also so friendly and handleable so that makes me think he may have an owner. Hopefully if there is an owner out there looking for him we can find them soon.”

RSPCA Cymru is now appealing for the owner to get in touch or for anyone with any information about this cat to call the inspectorate appeal line on 0300 123 8018.

The RSPCA would like to remind people to get their pets microchipped to give their lost pets the chance of returning home. It is also important to register the chip with a national database and update your contact details if you move or change phone number. More information can be found at www.rspca.org.uk/allaboutanimals/pets/general/microchipping

Our frontline teams are working hard to rescue animals in need this summer but we can’t do it alone – we need your help to Cancel Out Cruelty.