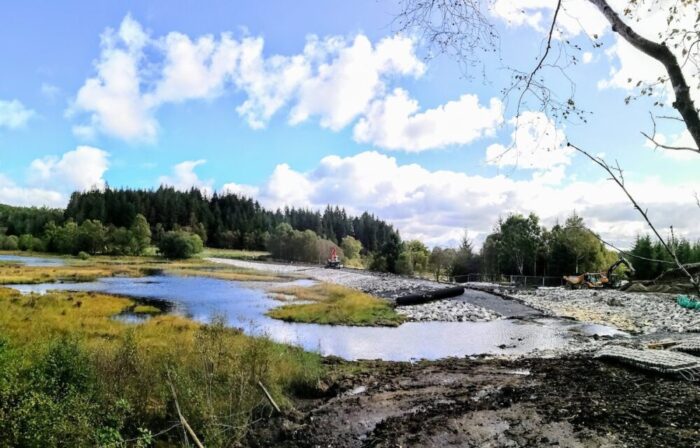 WORKS to ensure the long-term safety of a reservoir in Snowdonia have been completed.

The work, carried out for Natural Resources Wales (NRW) by contractor Jones Bros Civil Engineering UK, involved strengthening embankments and constructing a new rock spillway to safely convey water from the reservoir to a local stream.

Located in a Site of Special Scientific Interest, the work was carried out sensitively and now helps maintain water levels in this nationally important wetland habitat.

Around the reservoir there are areas of deep peat rich in purple moor grass, bog myrtle and cross-leaved heath. And there are pools full of bottle sedge, water horsetail, bogbean and common cotton grass visited by dragonflies.

Andrew Basford, project manager for Natural Resources Wales said: “Reservoirs are regularly inspected to make sure they remain safe and this work was the result of such an inspection.

“The works have been completed to a high standard, ensuring the safety of the reservoir and the integrity of the SSSI in the long-term.

“We are very grateful to local people for their cooperation during the work, which greatly helped us complete the work within four months as programmed.”

Mike Davies, senior contracts manager at Jones Bros, said: “We were pleased to work with NRW again to complete this vital project in Conwy.

“During the works, we ensured a continued supply of water from the reservoir to a private property and worked with an archaeologist and ecologist to ensure the area’s SSSI features were conserved and enhanced.

“We imported around 1,500 tonnes of clay and 1,000 tonnes of rock armour for the work on the spillway. This will absorb the impact energy of the water and slow its flow, helping to protect against erosion in the future.”

This work is part of NRW’s duty to safely manage their reservoirs under the Reservoirs Act 1975 and is part of a wider programme of reservoir safety work across Wales.

Established in the 1950s, Jones Bros’ leadership team consists of members of the second and third generations of the founding family. It employs close to 500 people.

The company is currently working on contracts in various sectors including highways, flood and marine defence, waste management and renewable energy around the UK.

The company runs an award-winning apprenticeship scheme, which has produced more than 40 per cent of its current workforce, with many of its senior managers having started out as apprentices or in a trainee role. It has recruited more than 100 apprentices during the past three years.