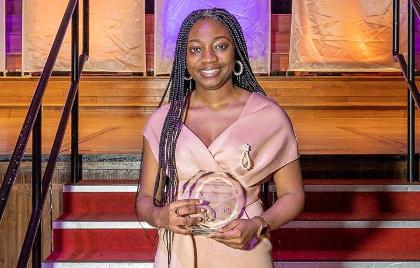 UNSUNG community heroes who have helped the people of Swansea through the pandemic were honoured at a special event.

Certificates were presented to more than 80 individuals and organisations – and trophies went to 34 others.

The help they have provided to local communities during the Covid crisis has ranged from emergency food supplies to online social conversations and essential medical deliveries to family shopping.

It was supported by partners such as the BAME Mental Health Support, Swansea Bay University Health Board, Swansea Council for Voluntary Service, Swansea University and the Welsh Government.

“The pandemic presented new and daunting challenges for our communities.

“The council and other organisations served in new ways with skill and dedication – and so did all the community heroes saluted at the Brangwyn Hall.

“They went out of their way to help people across our diverse communities cope at a time of great difficulty for many.

“We thank them for all their efforts. They have been – and continue to be – standard bearers for our area’s rich public spirit and vital to community cohesion.”

When Covid struck in early 2020, individuals and organisations across Swansea were quick to help others in a wide variety of ways.

Their outstanding work and extraordinary contributions to the community were a big help to thousands.

This year, council community cohesion officers asked the public to nominate their unsung heroes – and hundreds of nominations were received.

Those honoured included these groups and individuals.

The Swansea Muslim Community Service was set up by Aisha Rayhanna Amer during the pandemic. It was a response to the severity of the situation, with many families struggling to buy essentials

They distributed food packs and essentials and were the only service to operate seven days a week for people isolating throughout Swansea and some areas of Llanelli and Pontardawe.

On one delivery, Aisha saved a life. When the service user didn’t answer the door she realised something was wrong so immediately called 999. Without Aisha’s swift action, the elderly man could have died.

Service members raised funds and teamed up with Swansea Council, the Swansea Mosque foodbank and the Fareshare scheme so that they could reach out as widely as possible.

At the start of the Covid 19 pandemic, the Lloyd family – Claire, Lottie, Edward and Cassie – were one of the first to register with council local area coordinators as street champions in Uplands. Since that time, they have provided a valuable service to neighbours who include a vulnerable, isolated elderly woman living close by. The children especially have offered remarkable support to her, knocking on her door regularly to ask if she needs anything. They entertain her with their stories of school and other activities. The woman is grateful of this wonderful support.

BMHS is a trusted voice when it comes to public health guidelines and early intervention health information for ethnic minorities in Wales.

The organisation played an active role throughout the pandemic, including vaccination knowledge campaigns and the provision of support to vulnerable community members.

Other achievements include raising the profile of the Mental Health Act 1983 reform and contributing to the overall aims and objectives of Wales’ Race Equality Action Plan.

The organisation is led by Alfred Oyekoya. He has helped provide training, health awareness sessions and dance classes – as well as helping in practical and tangible ways to several community members.

Lizan received around 20 nominations for the Unsung Community Heroes awards. Since her arrival in the UK in 2019, she has supported Kurdish community members across Wales and specifically Swansea. She’s a member of the Kurdish All Wales Association. Lizan volunteers with various organisations providing diverse support. During Covid 19 she helped disadvantaged community members through food banks and interpreting. More recently, Lizan set up Kurdish classes for Kurdish children in Swansea and helps women to learn English.

Annaliese has been a committee member at Penlan South Community Centre for five years. She’s worked behind the scenes there throughout the pandemic, undertaking many roles and responsibilities.

After an initial Covid response foodbank ended, the committee partnered with the Trussel Trust to continue this much-needed service. Since then, the food bank has supported up to 20 families a week. It works in partnership with several other organisations and services.

Additionally, Annaliese also started a school uniform bank. This was welcomed by local people. She has also organised discos for families to come together; she understands that attending parties and dressing up is beneficial for the social and emotional development of children. Annaliese has further plans for fundraising and bringing the community together.

At the age of 27, Bukky lost her husband just four months after getting married in Swansea. Despite this, she reached out to others who are bereaved as a result of Covid 19. She volunteered to provide bereavement support by phone to ethnic minorities in Swansea. She uses her multilingual skill to normalise conversations about grief and she volunteers with BAME Mental Health Support.

During Covid-19, he continued to support people in need and those who were isolating through provision of food packs and other assistance. He helped provide food to NHS staff as a gesture of appreciation. He arranged Christmas gifts and dinners for homeless people.

Dr Malik is well known within the community and has links with different organisations supporting disadvantaged people. His work is appreciated by members of different faiths and community groups.

The positive feedback on a charity he founded – the Sameera Foundation – and his Facebook pages is evidence of his value to community cohesion.