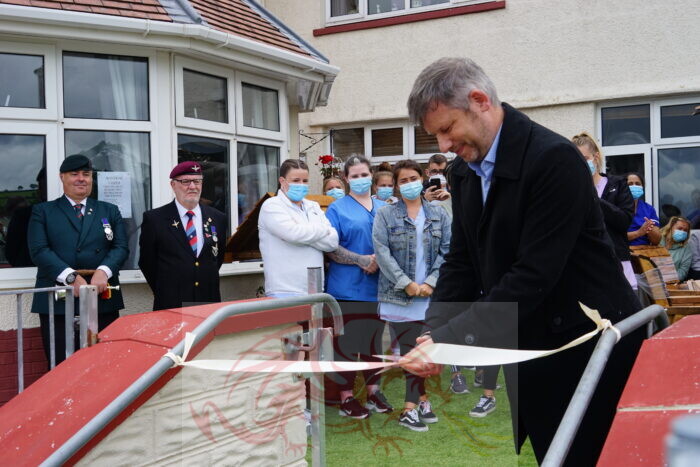 THERE were tears but also laughter at the official opening of the Memorial Garden at the Ty Mair Nursing Home in Felinfoel today, Friday (Jul 30).

The garden is an addition to the home where residents, staff and visitors can meet and enjoy a cuppa and have a natter. The garden features wooden tables, a fountain, plenty of flowers and a plaque which remembers those who passed away at the home.

The event began with the  Llanelli Veterans Association marching to the garden where a bugler played the last post. The veterans had also donated a wishing well to the home.

The home owners Peter and Charlotte paid tribute to the work of their staff. Peter said that his own parents had been cared for very well at the home in their final years. They thanked dignitaries and staff before presenting them with flowers.

Dr Andy Hayden performed the official opening of the garden with the cutting of a ribbon.

The ceremony, which was attended by Nia Griffith MP and Lee Waters MS ended with the releasing of balloons in memory of those lost at the home accompanied by the song, ‘Rise Up’. Following the ceremony refreshments were served.

Speaking to us following the event Nia Griffith MP said: “It has been a real privilege to be here and share in this very special service. To hear those comments those feelings for each and everyone of the people who have passed away here. It has been a very difficult time for everybody. Relatives couldn’t visit. Care staff did everything they could. Nobody would ever wish to pass away without having their family close by and it has been such a hard time for many families.”

Asked if things were changing for carers relating to pay and conditions the Llanelli MP said: “I very much hope it’s changing because what this year has really shown is how much we really do rely on care staff and how much it matters that the people who we love are properly looked after. How can you attract people in to do a job if it not properly paid. It is just so important that we should as a society value people who are looking after others. I hope it has changed public attitudes and I hope that we will appreciate in future the work they do.”

Lee Waters said: “It was very moving. That roll call of people who died that was in one care home in one part of Llanelli. That has been repeated across the area across the land and the human toll, coming together, remembering the people behind the names and the families and those who looked after them. That’s what today is all about.

He added: “Ty Mair is a remarkable place. These people are not well paid. These are not people traditionally we have celebrated in the community but this crisis has shown just how valuable they are. We need to make sure that as we come out of the crisis we remember that and we value these professionals because for all the footballers and the other people we as a society hold up when push comes to shove these are the people who are there in the final painful hours of people’s lives giving the care they needed.”

Asked if there was going to be real change for care’s conditions Lee Waters said: That is the point, these carers are not part of the NHS. They are not getting the 3%, they are not getting the pension schemes and the early retirement schemes and the other things that we rightly give to the NHS staff. There is a two tier system that we have allowed to develop. Putting that right is going to be difficult and expensive. We have made the commitment to give all social care staff the living wage by the end of this Senedd term and that is something we are going to deliver on. That is fairly significant and it is going to cost an awful lot of money but it is the right thing to do. It is not just about the money it is about the way we treat and value and view these professions because we haven’t done it we undervalued them.”