Calls have been made for a new protection zone forcing would-be owners in one corner of Gwynedd to obtain planning permission before being allowed to convert a house into a second home.

The recommendation that a trial area should be set up for a new planning class is just one of 12 made by Dr Simon Brooks in a recent Welsh Government-commissioned study, following concerns that the issue is growing out of control in some coastal communities.

Nefyn Town Council, which has been at the forefront of the “Hawl i Fyw Adra” campaign (which translates as “The Right to Live at Home”), has unanimously passed a motion offering itself as a pilot area to trial out such a move.

Dr Brooks’ recommendation is that ministers “should conduct a trial in a community severely impacted by second homes, and where there is community support for doing so, to evaluate the feasibility and impact of introducing a new use class for second homes.”

At present no planning permission is needed to transfer a normal dwelling into a second home.

But if the recommendation were implemented – spreading nationally if deemed to be successful – the local authority would need to allow planning approval for every such development if the percentage of the local housing stock already designated as holiday homes had already crossed a yet to be determined threshold.

Cllr Rhys Tudur, who proposed the motion to the town council, urged ministers to act on the recommendations of the report they themselves commissioned. 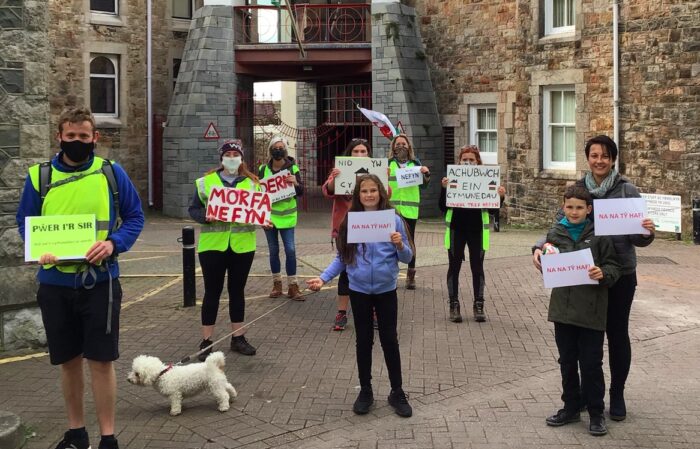 A Welsh Government spokesperson, however, said that any decision would now be down to the next government elected after the May 6 poll.

“The concern is that the momentum generated by the report will be lost now there’s an election on the horizon, but we mustn’t allow that to happen,” said Cllr Tudur.

“This shows we are determined to do something about the situation, and fulfills the criteria that community support is needed.

“Having commissioned this, essentially the ball’s in the government’s court now, but we don’t want to let up now.

“It goes without saying that some of the house prices in the area are beyond belief, for a two up two down in Morfa Nefyn, even with no view of the sea, now you’re looking at £250,000 which is so far out of the reach of most local people.”

Lending her support was Liz Saville Roberts MP, who herself lives in Morfa Nefyn.

She said, “We urgently need greater controls around the volume of houses that can transfer from being primary homes to second homes or buy-to-let holiday accommodation.

“Reforming our planning system is one aspect of mitigating the impact of this crisis on our communities.

“I look forward to seeing how this motion by Cyngor Tref Nefyn takes forward our national debate on housing and social equality, as this community is ideally placed to pilot such an initiative.”

On Wednesday (March 17) a 30 minute Senedd debate will discuss Cymdeithas yr Iaith’s petition, signed by 5,386 people, calling on local authorities to be given more powers to control the housing market.

In response to Nefyn Town Council’s motion, a Welsh Government spokesperson said, “We are committed to making affordable homes available and our record investment has delivered 20,000 new affordable homes in this Assembly term.

“We welcomed Dr Brooks’ report which recognises there are roles for both the Welsh Government and local authorities in developing solutions and we will be considering its findings carefully.
“However, we have also been clear that any significant decisions requiring legislation have to be for the next administration.”