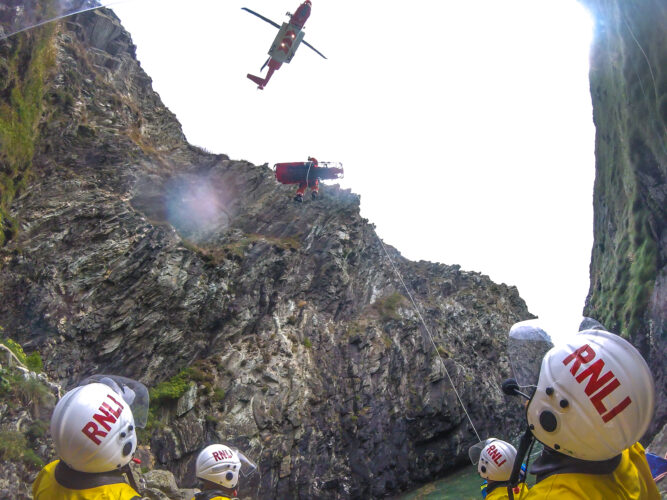 Volunteer crew members were alerted by their pagers at 10:50 am on Saturday morning after a safety team, covering a coastal running race, contacted the coastguard to say a runner had fallen 60ft down a cliff near Porth Dafarch beach.

As part of a multi-agency response, both Charity boats, the Atlantic B Class and D Class, were immediately dispatched and upon arrival the crew were transported to the mouth of a narrow gully by the stations D Class, where they had to swim ashore with medical kit and a stretcher in trying conditions.

At the scene the crew discovered an unresponsive lady at the foot of the cliff with numerous injuries, dressing her wounds whilst administering Oxygen they managed to place her in their stretcher whilst awaiting paramedic assistance from Helimed. The coastguard also dispatched their cliff teams from Holyhead and Cemaes Bay as there was no access other than by sea to where the runner had fallen. The team assisted the Helimed doctor down the cliff face to the casualty, two kayakers also helped, transferring extra oxygen bottles from the boats and through the narrow gully to the lifeboat crew on shore.

One RNLI crew member, Mike Doran, who is also a community first responder said, ‘she was in a poor way when we got there but the crew were fantastic and everyone did their bit, our thoughts are with her and her family’.

Both boats returned to the station at 3:40pm.