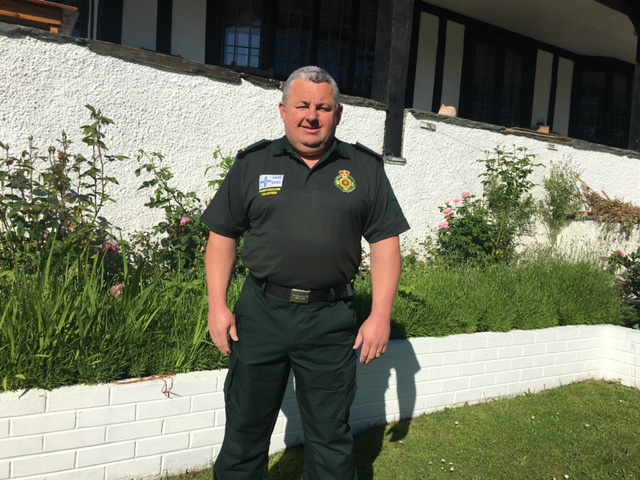 THE Welsh Ambulance Service is paying tribute to its hundreds of volunteers as part of national Volunteers’ Week.

Volunteers’ Week (01-07 June) is an annual celebration of the
contribution that millions of people make across the UK through volunteering.

Almost 600 volunteers give up their time to support the ambulance service in Wales, including 460 Community First Responders and 110 Volunteer Car Service Drivers.

“As an ambulance service, we place high value on the contribution of our volunteers, come rain or shine.

“The commitment from volunteers through the Covid-19 pandemic in particular was incredible, and we’re enormously grateful to those who
stepped up to help us during those difficult times.

“Volunteers’ Week is a perfect opportunity to highlight the work they do and to publicly thank them for their ongoing commitment.”

Community First Responders are volunteers who attend 999 calls in their community and administer first aid in the precious first minutes before an ambulance arrives.

They are trained by the Welsh Ambulance Service to administer first aid, including oxygen therapy and cardiopulmonary resuscitation, as well as the use of a defibrillator.

Last year, Community First Responders attended more than 14,000 emergencies in Wales, arriving at the scene of the most serious ‘Red’ calls in an average of seven minutes.

Among them is Rhodri Jones, the Deputy Mayor of Aberaeron, who has been volunteering at the ambulance service since 2005.

Rhodri, whose full-time job is as the Head of Digital Services at Wales Council for Voluntary Action, said:

“Thankfully, my employers are very supportive of what I do, even when I have to leave work at a moment’s notice to attend a call.

“It can be quite daunting if you’re the first person to arrive on
scene, but all of that comes with training and experience, and when you’ve been doing it for as long as I have, it’s second nature.

“What I enjoy about volunteering in my own community is that they know me, and I know them.

“I speak Welsh too, which is helpful, as a lot of patients will revert to their first language if they’re in pain or distress.

“You really feel like you’re making a difference – that’s what I
cherish the most.”

“Every second counts in an emergency, and the role that first
responders play in initiating that chain of survival can literally mean the difference between life and death.”First responders don’t just provide life-saving support at events such as cardiac arrests; they’re also trained to deal with a broader range of medical emergencies, including non-injured fallers.”Meanwhile, Volunteer Car Service Drivers use their own vehicles to transport people to routine hospital appointments, including dialysis, oncology and outpatient appointments.

Among them is Ian Cross, a civil servant from Pontypool, who volunteers two days per week to take patients to their appointments.

Ian, who is severely deaf, is usually accompanied by his hearing dog Buddy, a nine-year-old Cocker Spaniel trained to assist Ian by alerting him to important sounds, like smoke alarms.

“I was looking for new opportunities at the start of the
pandemic, and saw that the ambulance service was recruiting Volunteer Car Service Drivers.”You have to enjoy driving and have to enjoy meeting new people.”I’ve met so many different characters in my two years as a
volunteer, each with a different back story.

“I’ve even driven as far as Cambridge, Liverpool and London with some patients.

“Not every patient wants to chat, because it all depends where they are in their treatment and how well they’re feeling.

“The important thing is that you’re able to listen.”

“The Volunteer Car Service is an important cog in the
wheel of the non-emergency service.”Volunteers get to know their patients, especially those they
transport regularly, and it’s as rewarding an experience for them as it is for patients.”Last year, the Trust launched its first Volunteers’ Strategy, which sets out how volunteers will be better integrated into the workforce and better supported to deliver the role.

“Volunteering at the Welsh Ambulance Service has come a long way in the last two decades.

“There are new and exciting plans afoot as we further embrace our volunteers as part of the #TeamWAST family.”

As well as Community First Responders and Volunteer Car Service Drivers, the Trust also relies on the support of St John Ambulance Cymru as well as ‘BASICS’ doctors from the British Association of Immediate Care, who provide pre-hospital care at the scene of more complex emergencies.