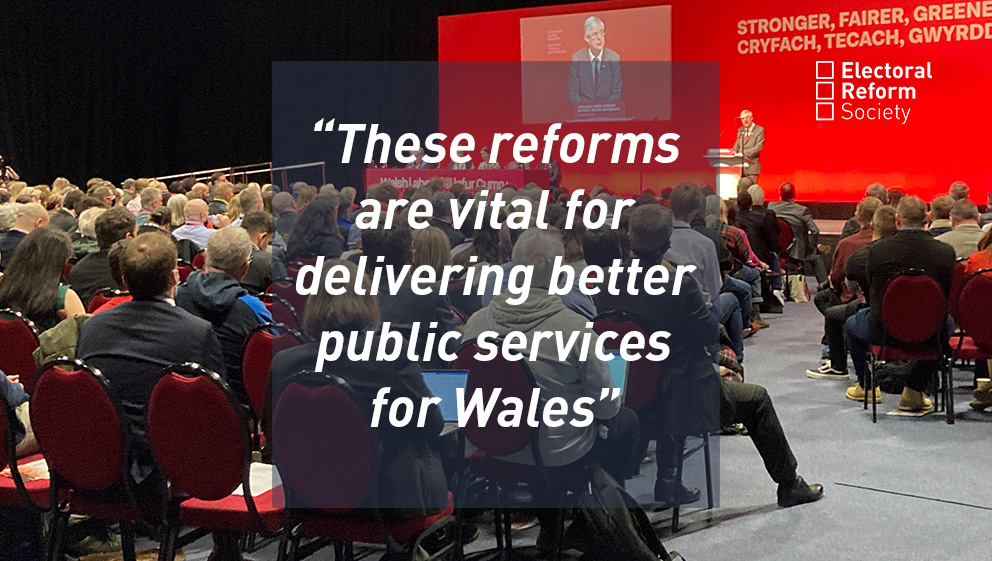 JESSICA Blair, ERS Cymru Director has welcomed Welsh Labour’s conference decision to back increasing the size of the Senedd.

“With just 60 elected members, Wales’ Parliament has long been under-resourced. But that problem has grown as Wales acquired more responsibilities – without the representatives needed to properly scrutinise legislation.

For as long as there has been a parliament in Wales debate has raged on its size. Those of us who have campaigned on this issue know just how difficult it has been to find consensus. It’s a topic that has often been a difficult one for Welsh Labour in particular.

That’s why it is great news that Welsh Labour’s 2022 conference unanimously backed a motion in favour of increasing the size of the Senedd to between 80 to 100 members. This vote is a huge step forward for the campaign for Senedd reform in Wales. The unanimous support of Welsh Labour’s plans from members, representatives and trade unionists give party leaders a strong mandate to deliver on these important reforms.

Expanding the Senedd from its current 60 members was included as part of the Plaid Cymru cooperation agreement with the Welsh Government to increase the number of members in the Senedd from 60 to between 80 and 100, with a voting system “at least as proportional” as the current one alongside proposals to enshrine gender quotas into law.

And these reforms are desperately needed. Nearly 25 years after the narrow victory for the campaign for devolution in Wales the Senedd has changed beyond recognition, going from a small Assembly with no government functions and limited powers to a fully fledged Welsh Parliament with law making and tax raising powers.

The Senedd has spent the last two years scrutinising major legislation and budgets in the midst of a pandemic and has had just over 40 people to do so, when government ministers, party leaders and Senedd Commission representatives are removed.

But this isn’t just about more politicians, these reforms are vital for delivering better public services for our country and a stronger democracy for the people of Wales. A larger Senedd, elected by a proportional system that enshrines in law gender quotas is vital for ensuring effective governance in Wales. As Professor Laura McAllister has said previously that ‘good scrutiny pays for itself’.

The unanimous backing of Welsh Labour Conference for the plans set out in the Cooperation Agreement recognises that the time is right for a parliament that can properly scrutinise decisions, for an electoral system where each vote counts and for our elected representatives to more accurately reflect the people of Wales.

It signals that the Welsh Labour party had indeed moved with the party leadership on this issue.

Ultimately, this vote provides the endorsement the First Minister Mark Drakeford needs to go into negotiations with Plaid Cymru on Senedd reform and come back with specific proposals on a stronger Senedd by 2026 and deliver on the plans that so many backed at this weekend’s conference.

We have a once in a generation chance to deliver a parliament that works for Wales, and thanks to last weekend’s conference this chance is greater than ever.”