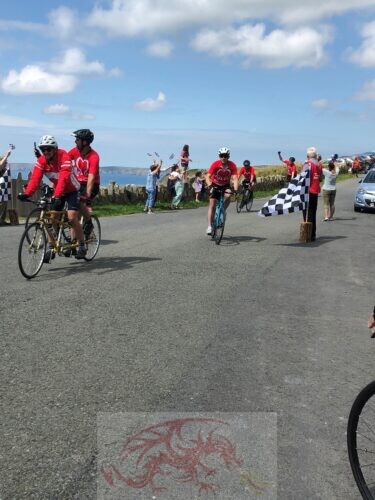 A group of well—wishers from Pembrokeshire formed a guard of honour at The Druidstone Hotel, Haverfordwest, to welcome-in ten cyclists on a 300-mile challenge, riding from Welwyn to Wales which was organised memory of a much-loved father who had passed away in the county ten years ago.

Members of the Haverfordwest & Milford Haven branch and Narberth volunteers representing the British Heart Foundation were joined by family and friends of Angus Archer, 35, whose father Jeff died from a heart attack in 2011. Jeff, who was 58 when he died, had been on holiday at the hotel with his wife.

Angus said: “When Dad went on holiday, he seemed absolutely fine. But he woke up one morning with chest pains and feeling sick. Mum called me to say Dad was very ill and had been taken to hospital. Thirty minutes later I got another phone call to say he’d passed away. I remember feeling utterly shocked. It was so unexpected. There hadn’t been any sign that this might happen.

“Making this journey now was very emotional. We arrived at the Druidstone Hotel ten years to the day after my father’s death. It’s a place that holds lots of memories for me and my family. It was where Dad proposed to my mum, and it was where they had their honeymoon. My sister got married there and I’ve stayed there on countless family holidays.

“I don’t pretend to be the fittest person. So, for me, completing this ride was a mission. But it was good to spend time with my friends and to raise money and awareness for some important charities.”

So far, Angus and his friends have raised over £17,000 for the British Heart Foundation (BHF) and Cots For Tots – a charity supporting the neonatal care unit at St Michael’s Hospital in Bristol.

The group have set up their own charitable organisation called Mitis Covey to raise money for causes important to them. Since being founded in 2019 they have helped to raise over £25,000 for different organisations.

Jayne Lewis, Fundraising Manager for the BHF, said: “It was wonderful to meet the team in person as they completed their epic journey. We are delighted to be able to welcome the group to Wales and show our appreciation for their monumental effort in memory of a much-loved husband, father and friend. It was a very emotional day and we were proud to be able to thank Jeff’s loved ones in person for supporting our charity in his memory.

“I would like to congratulate the whole team for their phenomenal fundraising efforts. The BHF will be using the money that it receives from this cycle ride to power our life-saving research. I would also like to thank the BHF Haverfordwest & Milford Haven branch and also volunteers from Narberth who came to support in welcoming the team as they made their way across the finish line.
“It’s only by equipping scientists to carry out their work that we can find new ways to prevent, treat and cure heart and circulatory disease.”
Heart and circulatory diseases cause more than 160,000 deaths each year in the UK. Around twice as many people are living with heart and circulatory diseases in the UK than with cancer and Alzheimer’s disease combined. The BHF is the UK’s biggest independent funder of heart and circulatory disease research in the UK.
There’s still time to support the group’s fundraising efforts at https://www.mitiscovey.com/news-welwyn-to-wales-2021-7
ENDS
For more information contact Rachel MacManus in the BHF Media Team on 07977 271 568 or macmanusr@bhf.org.uk
Notes to editors
About the BHF
One in four of us in the UK and one in three globally die from heart and circulatory diseases. That’s why the British Heart Foundation funds world-leading research into their causes, prevention, treatment and cure. Advances from our research have saved and improved millions of lives, but heart diseases, stroke, vascular dementia and their risk factors such as diabetes still cause heartbreak on every street. With the public’s support, our funding will drive the new discoveries to end that heartbreak.

We are the biggest independent funder of heart and circulatory disease research in the UK.